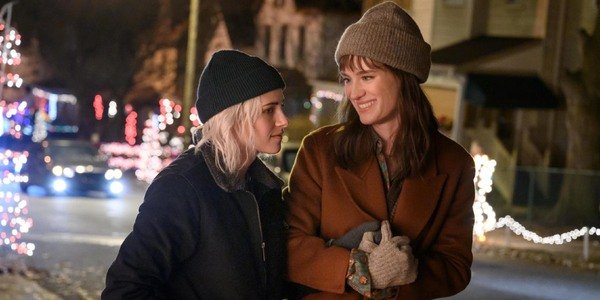 With the world’s future shrouded in a state of deep perplexity and the untold, a vast assemblage of actors come together in this pleasant film to demonstrate the great value of being honest to oneself and others. Happiest Season explores the consequences of withholding the truth in a moving yet warmhearted way and is bound to move many an audience.

Directed by actress and filmmaker Clea Duvall and released on Hulu Nov. 25, the movie’s central plot revolves around a young lesbian pair consisting of Abby Holland (Twilight star Kristen Stewart) and Harper Caldwell (Mackenzie Davis). The duo travels to Harper’s childhood home for the holidays, where Abby believes people register them as an out-and-proud happy couple.

Not long into the film, though, Harper reveals that she had not yet come out to her conservative parents–her mayoral candidate father, Ted Caldwell (Victor Garber), and perfectionist mother, Tipper Caldwell (Mary Steenburgen). In turn, the couple develops an impromptu scheme in which Abby is Harper’s orphan roommate who has no one else to spend the holidays with–and of course, both of them are straight.

However, upon arriving at the Caldwell family residence, Harper soon gets caught up in a childish rivalry with her sisters, Sloane (Alison Brie) and Jane (Mary Holland), and an unexpected resurgence in a relationship with her ex-boyfriend Connor (Jake McDorman). Facing detachment yet wanting to help Harper come out, Abby turns to her gay best friend, John (Schitt’s Creek star Dan Levy), and Harper’s childhood ex-girlfriend, Riley Johnson (Aubrey Plaza).

While the film did incorporate the clichéd theme of not coming out, viewers will find that Happiest Season stresses its message in an original and influential way. Like a piece of wrapped candy, the film places its sweet treat of a lesson at its core and adorns it with a colorful, cheerful, and festive wrapper. Unlike any other LGBTQ-promoting movie, it appeals to all types of audiences through its diverse palette of characters and humorous, romantic nature.

Happiest Season also individualizes itself by including illustrative features and scenes. One clear example of this is when Abby, trying to sneak to Harper’s room at night, hides in a hallway closet as Tipper approaches. Ultimately, she discovers Abby there and questions, “What are you doing in the closet?” The scene will make audiences laugh both on comical and symbolic grounds.

Another unique feature of this movie is how it presents a handful of cast members who have come out as gay in real life, making their characters more realistic and bold. Such actors even seem to tell some of their own stories about coming out and silently encourage others who are gay to do the same. For instance, toward the end of the film, John talks to Abby about his painful experience coming out and the reactions that followed. Yet,  having revealed the truth, one can see how content and proud he seemed to feel throughout the film.

Besides its emotional and sentimental aspect, Happiest Season also exhibits an immense level of humorous detail that will leave audiences smiling. One can especially notice this in the juvenile relationship between Harper and her sisters. The trio competes against one another for favoritism at the hands of their parents by continually striving to impress them, acting childish. Viewers will instantly recognize the similarity of certain scenes to films like Daddy’s Home and Instant Family.

While Happiest Season narrates a remarkable tale and expresses compelling themes, it will also touch and move anyone who watches it. Whether a fan of romantic comedies, a supporter of the LGBTQ community or merely someone seeking motivation amid the world’s bleak times, the film will undoubtedly kick off the holiday season as the “happiest season” of the year.