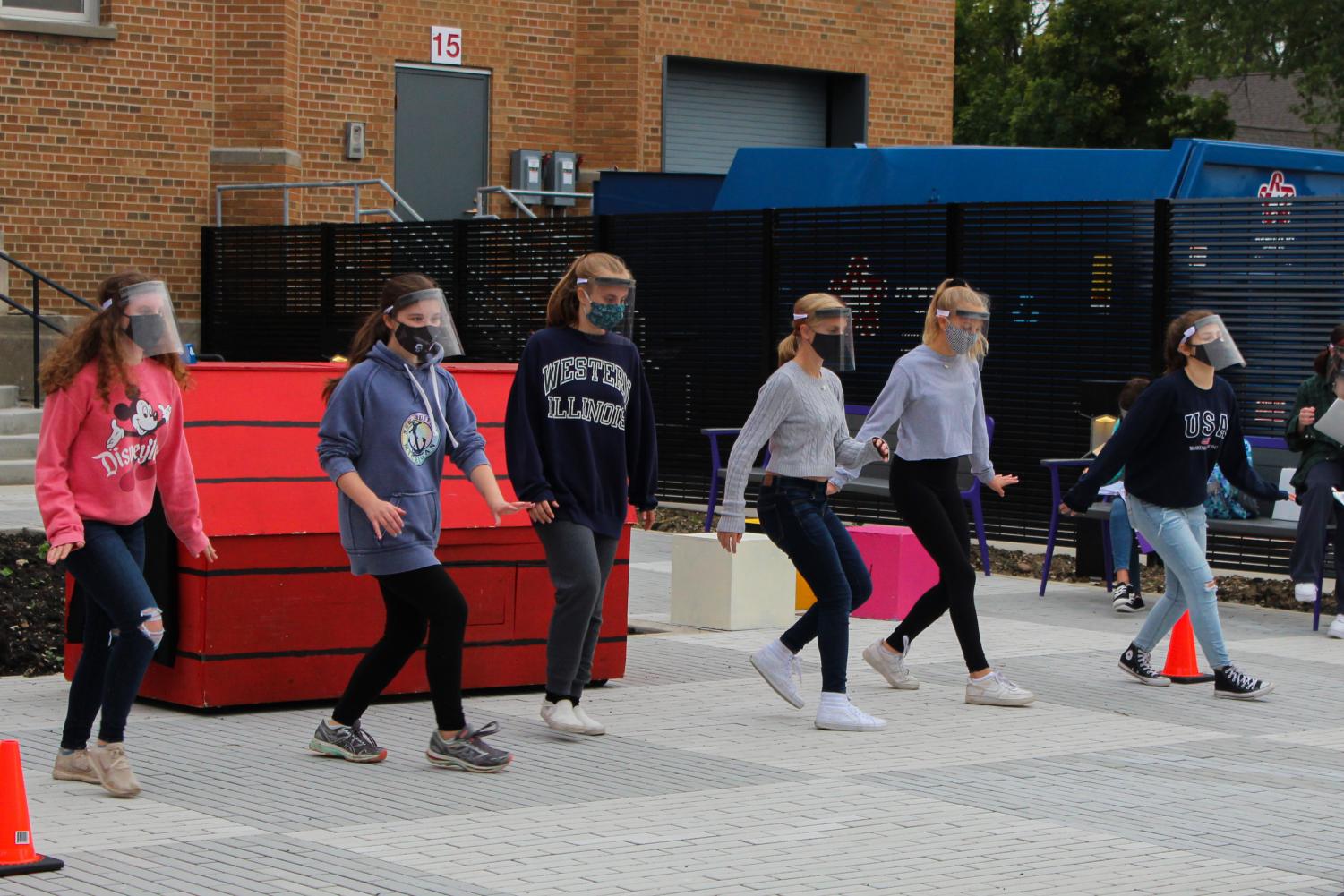 “The expression, ‘The show must go on!’ is very tried and true for us right now here in the pandemic,” Director of Snoopy! the Musical Kim Maslo said.

While school is in session online, many other in-person school activities have been moved to the computer. However, in the last few months, they have been moving sports outside to better adhere to the safety guidelines. So the theater program decided to follow their lead and move the theater outside.

The cast and crew of the fall musical, Snoopy!, have been having outdoor rehearsals in the Prince Street Plaza to prepare for the show. Because of the importance of timing and togetherness in musical numbers, Maslo knew that meeting virtually through Zoom, a video conferencing app, instead of face to face, would not work for rehearsals.

“They [rehearsals] will all take place outdoors, so we need to bend to the will of mother nature. We were supposed to start rehearsals on Sept. 2, but since they were threatening storms, we decided to have our rehearsal on Zoom that day, and revert back to outdoor rehearsals for the rest of the week,” Maslo said.

Theatre is all about improvisation, so performers often have to work off the cuff and change the rehearsal for the day, due to unpredictable things like weather.

“The problem is, with a musical, it’s very challenging to do a group musical number through Zoom, because of the delay. It is possible to work with soloists because they could cue the music and I could work with them and give them feedback,” Maslo said.

Senior Kate Crisp, who plays Sally and is also the dance captain, is preparing for her possible final performance of her high school career. She has been working hard to teach her fellow cast members choreography for the show and doing it over Zoom at times.

“I have to learn each dance number through a video and then I have to teach it to everyone in that dance number,” Crisp said. “I’ve recorded myself explaining the dance, that’s what we had to do first because we couldn’t have rehearsals in person, and I’ve had to teach them over Zoom, I’m not a teacher type person, so I feel like I made no sense teaching.”

Sophomore Ceci DeArcangelis, who plays Snoopy, persevered through the dance rehearsals on Zoom. But, on Zoom, that’s not always possible.

“It could get pretty frustrating at times because we all want the show to be the best it can be, and when our audio keeps cutting out, it makes that goal more difficult to achieve,” DeArcangelis said.

The entire crew of the musical has been working with the district and administration to be as Covid-19 conscious as possible during rehearsals.

“We had a safety proposal this year that was approved by the district and administration and it was given to all the parents for them to read through and sign in order for students to be able to meet in person, and we have a safety check before each rehearsal, list of questions and a temperature check,” Maslo said.

The district and the directors were in charge of the safety details of rehearsals, but the actors, actresses, and the crew of the show had to work together to keep rehearsals going smoothly and to keep everyone safe.

Sophomore Ashley Chavez, who plays Lucy, has been in other productions at DGN as a freshman, but this year presented its own set of challenges other than memorizing lines and dance numbers.

“This year’s rehearsals are way different than I’m used to. We are completely outdoors and we have to wear face masks and face shields the whole time unless we’re drinking water,” Chavez said. “Sometimes the face shields fog up while singing or speaking and we can barely see through them.”

Freshman Jake Rambke, who plays Linus, is starring in his first production at DGN. Although it’s been a difficult transition, Rambke and the rest of the cast and crew have been using practical solutions to keep rehearsals as safe as possible.

“Now we are at rehearsal wearing face masks and shields all the time as well as taking our props home so they don’t have to switch hands all the time. I see people working backstage to sanitize the props we cannot bring home after each time they use them,” Rambke said. “Rehearsals over Zoom were a challenge, if we hadn’t had a video of a previous performance of the show we would have been lost, there was a whole lot of confusion that was easily resolved during in-person practice.”

The cast and crew of Snoopy have their opening night Oct.3, outdoors in the Prince Street Plaza. Only 33 audience members are allowed to attend each show, to watch the 17 cast and crew members, due to the guidelines saying that 50 people may be in a group socially distanced from each other.

Opening night will have its own set of obstacles, but costumes and backdrops will fortunately not be one of the major ones. All performers have only one costume during the show, so they are to show up to school ready for ‘curtain call’ with hair and makeup done. It is a fairly simple set with only three backdrop walls and a giant dog house on wheels.

“It’s a pretty portable show. It just happened to be the perfect show to do during a pandemic, not that anyone thinks of that when they’re choosing shows.” Maslo said.