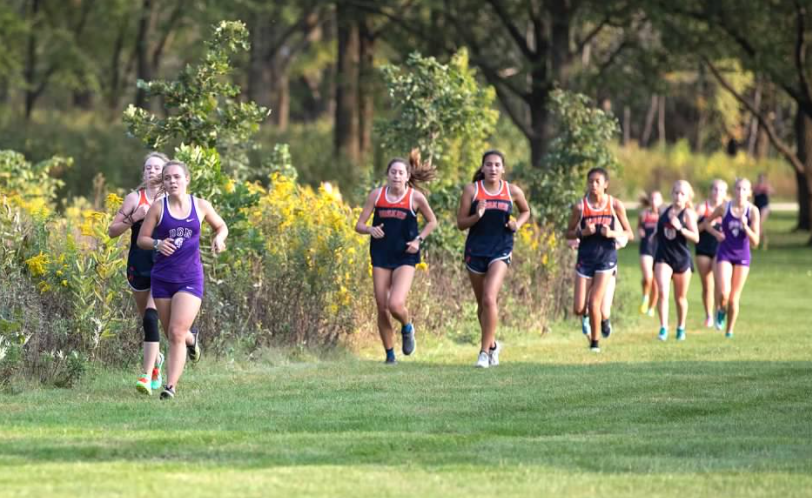 LEADER OF THE PACK: Rylan Gaspar (12) leads a group of runners at home dual meet versus Oak Park River Forest. Dual meets are the only regular season competitions permitted this season in order to comply with COVID-19 safety guidelines. (Photo by Julie Chen)

LEADER OF THE PACK: Rylan Gaspar (12) leads a group of runners at home dual meet versus Oak Park River Forest. Dual meets are the only regular season competitions permitted this season in order to comply with COVID-19 safety guidelines.

To comply with IHSA safety guidelines, girls’ and boys’ teams practice in groups based on ability and upcoming competitions. The new practice format is contradictory to the philosophy of the boys’ cross country program, according to head coach John Sipple.

“We like to normally keep our team all together because every kid, freshman through senior, truly matters and plays a role in the overall success of the team,” Sipple said. “This is still the case, but because our training groups are going to be so separated out of necessity, it is going to be hard to build the same level of camaraderie and relationships between guys of varying ability.”

For both boys and girls, regular-season competitions consist of dual meets with two teams in attendance. One competition spans three days, as no more than 50 people can be on the race site at a time. One race is run each day, with three races (JV1, JV2, and varsity) held in total.

“I kind of think [as a returner] it’s harder because there are no spectators allowed, so when we’re at the races it doesn’t really feel like a meet,” JV1 runner senior Rylan Gaspar said. “You’re definitely not as motivated, and it kind of just feels like a tempo run, or a mock meet, which makes you not want to go as fast.”

“I’m almost envious of the freshman of not having the experience of coming down the straightaway and having all the moms in their lawn chairs screaming. It’s definitely different,” Chen said.

Chen and Gaspar both noted that a major challenge this season is a lack of connection with underclassmen, who are often placed in a different practice group.

“Usually you get to talk to younger guys and get them in on the culture, like, ‘hey here’s why we run, here’s the way practice works, here’s how you have fun at practice without letting it get in the way of training.’” Chen said. “Now that we’re all separated by time, all the new people aren’t in the groups with the juniors and seniors that are always on the team, and it’s just been hard not being able to be as a whole team training together.”

“Overall, the team dynamic is much better than I feared it might be. We do a lot of activities away from running to build the team and obviously, we cannot do those things in today’s world,” McDonald said. “I think just being able to have an in-person social outlet on a daily basis has made the team environment very positive.”