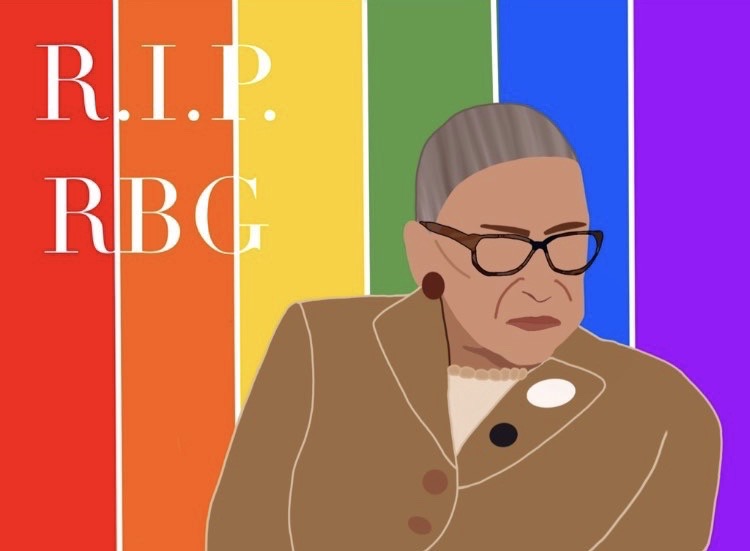 BEACON OF HOPE: Ruth Bader Ginsburg was revered as a champion of equality for all, and she prominently advocated for LGBTQ+ rights. (Graphic by Audrey Casten)

BEACON OF HOPE: Ruth Bader Ginsburg was revered as a champion of equality for all, and she prominently advocated for LGBTQ+ rights.

RBG: Remembering and honoring a hero

This past Friday, Associate Justice of the Supreme Court Ruth Bader Ginsburg, feminist icon and outspoken women’s rights advocate, passed away at the age of 87 (to view her New York Times obituary, click here). Ginsburg’s storied life was marked by her constant belief that women “belong in all places where decisions are being made.”

Ginsburg began her career as a civil rights lawyer in the 1970s. Her historic work with the American Civil Liberties Union on their Women’s Rights Project was centered on the notion that discrimination on the basis of sex should be nonexistent in all aspects of life. Some of her trailblazing work includes case victories that expanded women’s social security benefits to equal men’s, deemed pregnancy discrimination unlawful, and permitted women to work on Navy vessels.

Fast forward to 2020. During such a turbulent time in our country, in which our president spews derogatory and mocking comments about women, Ginsburg was the hope of millions who were comforted by the fact that she would fight for them.

She was a reminder that there was always someone in our corner, standing guard, ensuring our freedoms and opportunities. She represented a turning point in our country, a chance for America to become a better place – to make progress, and to allow more women into those places where decisions are being made.

I found out about Justice Ginsburg’s passing as I was playing basketball in my friend’s driveway on Friday night. My friend’s neighbor walked by and asked us if we knew who Ruth Bader Ginsburg is. I replied yes, and he delivered the news. “It is a sad, sad day today. Especially for young women like you, who she fought so hard for,” he said.

The loss of RBG, who was an inspiration to myself and women across the country, felt like the loss of someone I had known my whole life. Ginsburg showed me that women can be powerful and influential despite the sexism and misogyny of society. She was constant, undisputed proof that showed the world that women are just as qualified as men. As soon as I found out about her passing, I immediately called my sister. My sister and I questioned what this meant for our futures and I found myself crying for a woman I had never known.

Her death now presents America with a challenge. Can we properly honor this woman’s legacy and carry on her life’s work? Or will we allow ourselves to regress and close the doors RBG has opened for us?

The first step in answering these questions comes in filling her spot on the Supreme Court. Ginsburg’s final wish was to be replaced after a new president is appointed, and by attempting to fill her seat President Trump is robbing the people of an opportunity to choose a candidate who will protect Ginsburg’s ideals and aspirations for our nation. As voting for the presidential election had already begun, the replacement of Ginsburg should be decided by the American people.

Ruth Bader Ginsburg was a symbol of the future; a testament to how far we’ve come, but also a stern reminder of how far we still have to go. It is our responsibility to make sure her fight was not in vain. Her hopes for who we can become must not die with her.

In order to carry on her legacy, we must be vigilant in destroying inequality and injustice. We must not only denounce hatred or discrimination but take active steps to eradicate it. If someone makes a derogatory remark, speak up, and explain to them why their words are harmful. If you notice something is inequitable, do not be afraid to question its legitimacy. Participate in marches and protests held by organizations such as the Women’s March, Black Lives Matter, and March For Our Lives.

Above all, if you are of age, vote. Make a plan to vote and make sure your voice is heard on election day. Vote for justice and equality to carry on Ruth Bader Ginsburg’s legacy.