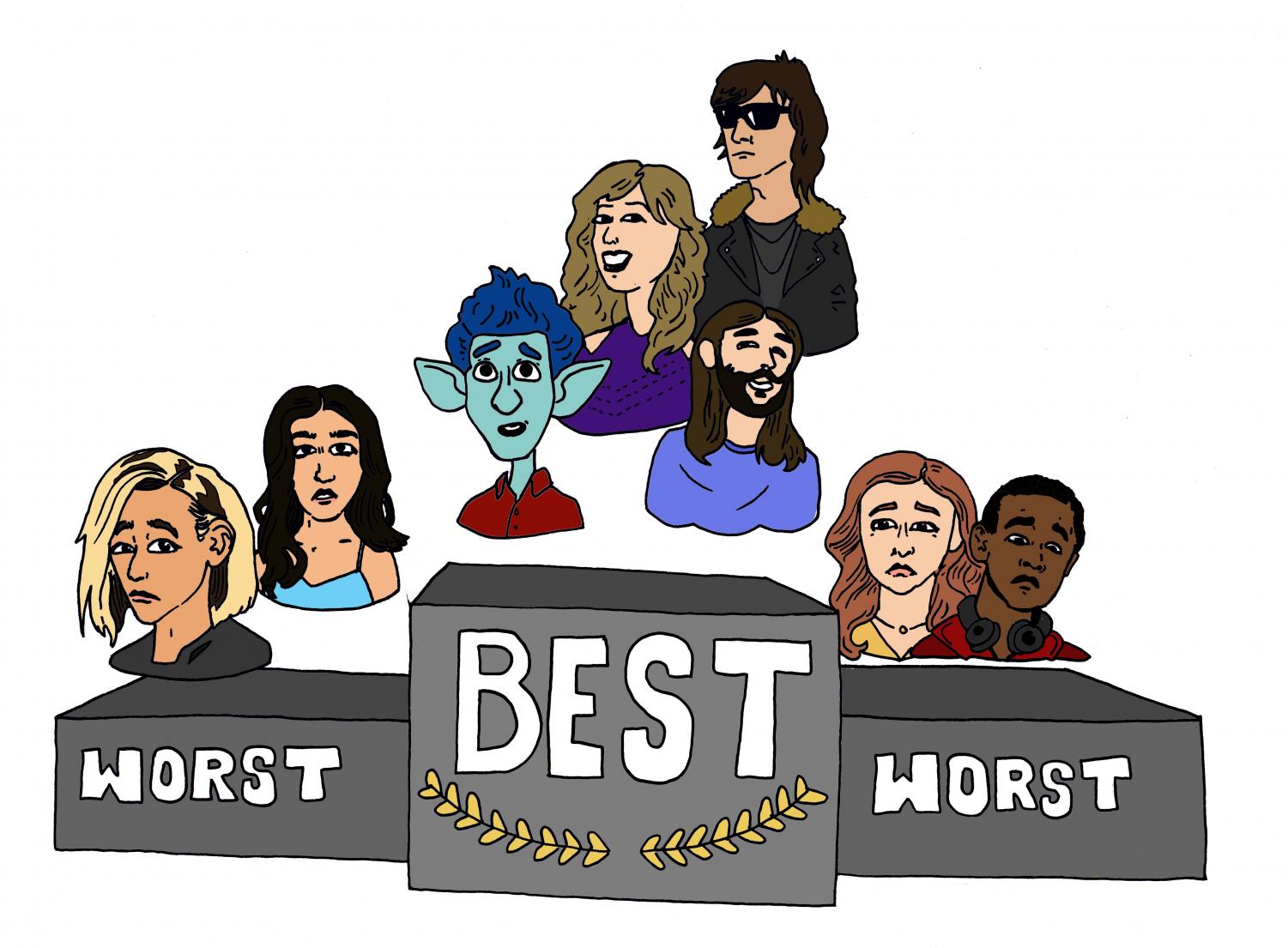 ON THE PODIUM: What the Omega’s A&E section was loving this summer, and what we weren’t too crazy about. (Graphic by Eliot Michaels)

ON THE PODIUM: What the Omega’s A&E section was loving this summer, and what we weren’t too crazy about.

A &E editors Allie Emmet and Gretchen Lucina’s takes on the hottest music, television, and entertainment of summer 2020.

Netflix fulfilled our mid-pandemic comfort show needs when they released the fifth season of Queer Eye in early June. The basis of the show is that five queer men, known as the “Fab 5”, help guests improve their life and style. As always, the transformation, not only in the guest’s fashion but in their self-confidence and outlook on life, is beyond heartwarming. That is what makes it so touching. It is not just about how to dress or style your hair better. The weight of the show lies in the emotional aspects corresponding to the guest’s life and helping them see their worth. The show does a fantastic job of representing a wide variety of people to “makeover” and highlights important issues along the way, like racism and homophobia. If you ever need a show to have a quick, happy cry to, I highly recommend Queer Eye.

All American Season 2 was released Oct. 2019 on The CW, but most people watched it over quarantine when it released on Netflix March 2020. Compared to season 1, season 2 was a let-down. It started off well, but the more it went on the more side-stories there were. Remarkably, this season alone has covered many tough topics such as depression, teen pregnancy, racism, gangs, and underage drinking. Still, there was so much going on at once, it was hard to keep track of. Though it did leave off on a major cliffhanger, so I will be watching season three with high hopes.

Although Disney’s main audience is kids, their movies are surprisingly entertaining and offer insightful lessons for people of every age. “Onward” is a prime example of this. “Onward”, which premiered in March on streaming services due to Covid-19, is the magical tale of two brothers who set off on a quest to spend a day with their late father. It starts off comical, but as they embark on their journey, the movie touches on many deep subjects, like dealing with the loss of a loved one and struggles with self-image. The morals are worked into the plot really well, so it has a balance of promoting positive messages and continuing an exciting story line. This movie is a great recommendation to people who enjoy animated Pixar movies that are full of adventure but can also be tear-jerkers.

The sequel of The Kissing Booth came out on Netflix July 24. When it came out, everyone was excited to watch it, but it did not live up to its expectations. It was definitely entertaining, but not for the right reasons. It was almost hilarious how cringy the whole movie was. One of the stars, Joey King, played Elle and her character was irritable to watch. Elle made a big deal about her boyfriend Noah (Jacob Elordi) being at college and she was worried about him cheating on her. When really, he should’ve been the one worrying about her. The movie had too many unrealistic scenarios in it like how Elle got accepted into Harvard when she spent the whole movie at the arcade. Though this movie was not the best, I am anxious to see what The Kissing Booth 3 has to offer.

Rather than Taylor Swift’s last album, “Lover”, her new album “Folklore” has a more calming and soothing tone. Released in July, she wrote and produced the whole album all of quarantine which is super impressive. The soundtrack is not very fast, and some songs even sound like her older music that she used to create. It’s a mix of slow-pop and indie music. The album title is named Folklore because of the great amount of storytelling which depicts Swift’s creativeness. Most of the songs are made up which makes the listener imagine and feel some type of way when listening to her songs. She even waited to announce the album day before she released it, which was a great and fun surprise to her fans.

Gabbie Hanna, a well-known (and well criticized) internet “comedian”, gifted her critics yet another EP to tear apart when she released “Bad Karma” this May. Apart from being attacked on Tik Tok for her music, Hanna was previously known as a popular Vine star. It is safe to say that she should have considered ending her internet career when Vine was deleted in 2016 because that’s when she entered the music business. “Bad Karma” consists of 5 songs that are the perfect balance of terrible radio pop and her attempt at angst against her haters. I am not a full-fledged hater of hers, as I can accept that her voice has potential, but the lack of production and originality on this EP lead it to be quite underwhelming.

Best: The Strokes’ “The Adults Are Talking”

The Strokes proved, once again, that they do not disappoint when they released their song “The Adults are Talking”. As the first song on “The New Abnormal”, it serves as an excellent preview to the rest of the album and grabs listeners’ attention right off the bat with a catchy guitar line. With lead singer Julian Casablancas’ distinct voice and the striking guitar riffs throughout, this track lives up to the classic Strokes sound that fans have grown to know and love. It is reminiscent of past albums, yet it also exhibits stylistic changes made by the band, as they lean away from their usual “edge” and focus more on the melodic and lyrical aspects of their music. The Strokes struck the jackpot in creating a lively, mood-boosting song while also maintaining their originality as a band.

Tik-Tok star Dixie D’Amelio released her first single “Be Happy” June 26. D’Amelio wrote the song about mental health during the pandemic. It has a meaningful idea to it, but it does not make sense. The song title is “Be Happy” but the main chorus is ‘sometimes I don’t want to be happy’. It is very confusing why she would have this as her title when it contradicts the lyrics. She even pronounced the simple word “but” wrong in her song. The song is very catchy but also very generic. Still, it is notable how she made a song to relate to people about how she was feeling while social-distancing during the pandemic. Coming from her platform, people took her song as more of a joke than seriously. I have no hate towards D’Amelio and she is not a bad singer, but next time she should just stick to Tik-Tok.