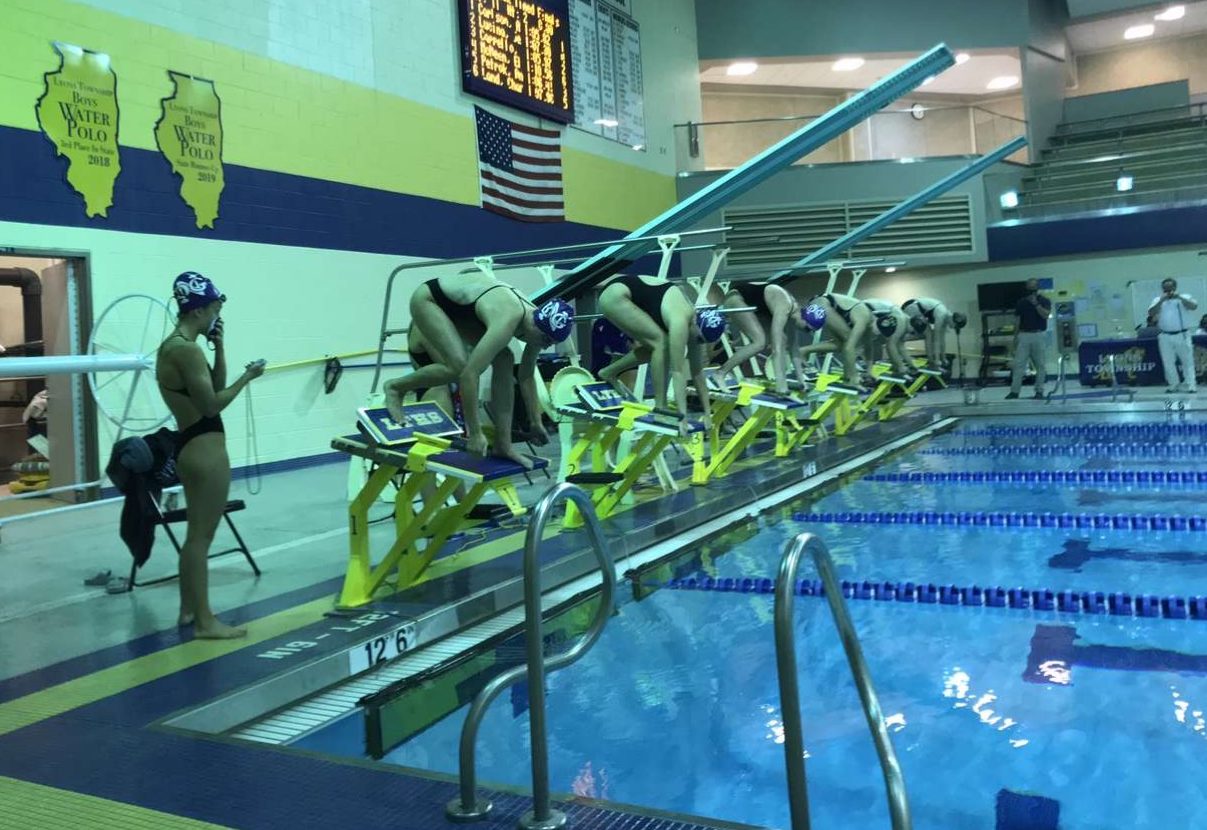 ON YOUR MARKS, GET SET, GO: DGN and LT swimmers prepare to race at a Sept. 10 meet. (Photo by Amelia Carlson)

ON YOUR MARKS, GET SET, GO: DGN and LT swimmers prepare to race at a Sept. 10 meet.

For the girls’ swim and dive teams, the season so far has been all about staying positive and grateful through unconventional circumstances.

“I’ve actually been very shocked and pleased,” varsity dive coach Ashley Remegi said. “These girls have done an awesome job, both swimmers and divers, of just embracing the changes and knowing that things aren’t going to be the same but we are appreciative of being able to be here.”

The swim and dive teams have had one meet thus far (Sept. 10 and 11 vs. LT), but have been practicing for several weeks. While attitudes remain positive, the first month of the season has not been without difficulty and change. In a Sept. 8 Omega interview, swim coach Jennifer Heyer-Olsen stated that “to be honest, nothing has been the same this year except the basic fundamentals of swimming and diving.”

The structure of meets themselves has been a primary change to the swim and dive season, as the state has set a maximum limit of 50 persons combined between athletes, coaches, timers, and officials. Senior swim captain Evelyn Ellstrom elaborated on how the first meet was unorthodox, and likewise less convenient, as a result.

Even with these added elements, Ellstrom and senior co-captain Annika Paskiewicz both firmly believe that, considering the circumstances, the meet went well.

“I have no complaints with the meet overall. Everyone wore their masks, everyone distanced as much as they could. I think for the first meet of a strange season, it was a great start,” Paskiewicz said.

For varsity dive co-captain Ellie Finley, just being in a competitive atmosphere again was a fantastic experience.

“The feeling of competitiveness is definitely still present, and it felt so great to feel that again. The overall feeling was extremely similar to before which we all loved. The meet went really well, and the team did a great job besides some first competition nerves which is totally normal,” Finley said.

Another fundamental change for swim and dive this season has been team dynamic and socialization. Due to social distancing protocols, the program had to be split up into sections to practice at separate times, meaning that the three groups cannot socialize or interact in any way.

Within the three groups, additional precautions are taken. Everyone present must practice social distancing and wear a mask at all times unless in the water. To social distance, divers set up yoga mats at least six feet apart around the perimeter of the pool when not diving or in line, and swimmers are put into lanes in groups of three, with one person on each end and one in the water.

In the eyes of swimmers and divers alike, socializing at practice is still manageable, but the biggest issue comes from a lack of team building and bonding outside of the pool.

“The biggest difference between this year and previous years is that we’re not able to do the same traditions, like pasta parties or decorating the freshmen rooms,” Ellstrom said.

Despite this challenge, Remegi remains positive, saying that all it calls for is more creativity.

“One of the biggest struggles we’ve had to overcome because we do a lot of team-building activities. We’ve just had to be a little more creative with how we do that. It’s not that we can’t, it’s just that you have to be more creative because you have to keep your distance,” Remegi said.

Team bonding may be more difficult this year, but Paskiewicz explained how team motivation and work ethic need no extra boost.

“I really can only speak on behalf of the varsity team, because that’s who I am with every day, but from my perspective, the motivation is definitely still there. We are all working hard every single day and putting in maximum amounts of effort as we would any other season,” Paskiewicz said. “Also, something about this season being restricted and unlike any other, in a weird way, I feel has brought us closer.”

Finley, like many of the girls on the swim and dive teams, is thankful to be practicing and competing at all. She mentioned how, more than anything, she is grateful for the opportunity to dive her senior year through the COVID-19 crisis.

“I was so scared [the season] wouldn’t be able to happen, so I am extremely grateful for every practice we get and how hard the coach is working to stay safe but still making it so fun to be there. It is honestly something I look forward to going to every day,” Finley said.