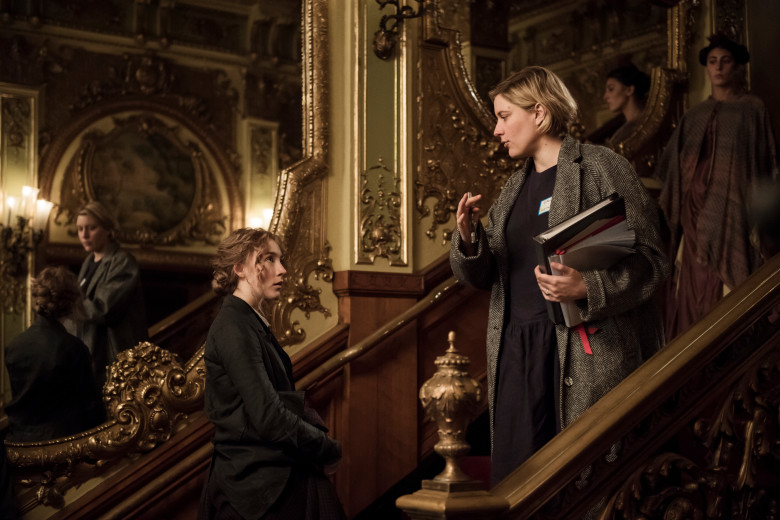 FEMALE DIRECTED: Saorise Ronan and Greta Gerwig on the set of Little Women

The Oscars are still a man’s game

Once upon a time in Hollywood, Natalie Portman called out the lack of female directors representation while introducing the Best Director nominees at the 2018 Golden Globes. Two years later, and over 10 years since Kathryn Bigelow was the first woman to win Best Director, the film industry has still not learned their lesson about choosing nominees.

The past year was an outstanding year for female directors, for more than 10 percent of top films directed by women, which is the highest percentage in more than a decade. Movies, such as Captain Marvel and A Beautiful Day In The Neighborhood, were led by female directors and made large strides in the entertainment industry.

But following the historic year for female filmmakers, the academy chose to exclude talented female directors by only nominating male directors in the Best Director category for the 2020 Oscars awards.

The best director category included Quentin’s Tarantino’s Once Upon a Time in Hollywood, Sam Mendes’ 1917, Martin Scorsese’s The Irishman, and Todd Philips’ Joker, in which each movie displays Hollywood’s favor toward movies centered around men.

Hollywood loves to make movies centered around white men. While I’m not trying to take away The Irishman’s or Joker’s nominations, the number of movies and films critically acclaimed follows the same format. And when movies are created that don’t follow the standard, like Greta Gerwig with Little Women, the academy doesn’t bat an eye or think to consider it as a possible nomination.

Arguably the most egregious nomination snubs were the exclusions of Greta Gerwig’s Little Women and Lulu Wang’s The Farewell. Both films were critically acclaimed but seemingly forgotten during awards season. Gerwig created a beautiful adaptation of a timeless story and Wang wrote a moving and witty film appealing to numerous audiences.

Like Gerwig and Wang’s films, other female-directed movies, such as Céline Sciamma’s Portrait of a Lady on Fire and Lorene Scafaria’s Hustlers, deserve to be represented in awards ceremonies. Especially on the biggest night for the film industry.

While I am not arguing that Martin Scorcese is less deserving for his work compared to Lulu Wang just because he’s male, what I am trying to prove is that the Oscars did with the nominations this year is the same tradition that the Academy has been following for decades, having a bias to already known male directors and passing over the stupendous talent shown by females.

I am urging that the Oscars must include more female directors as the industry takes the right steps forward equal representation. It’s time for the Academy and movie industry to accept that every year the categories grow more diverse with new talent, and to exclude them out of having a chance at winning isn’t fair to female directors.

The nominations show a major step backward while the rest of the movie industry is working hard to move in the right direction to reflect their audience.