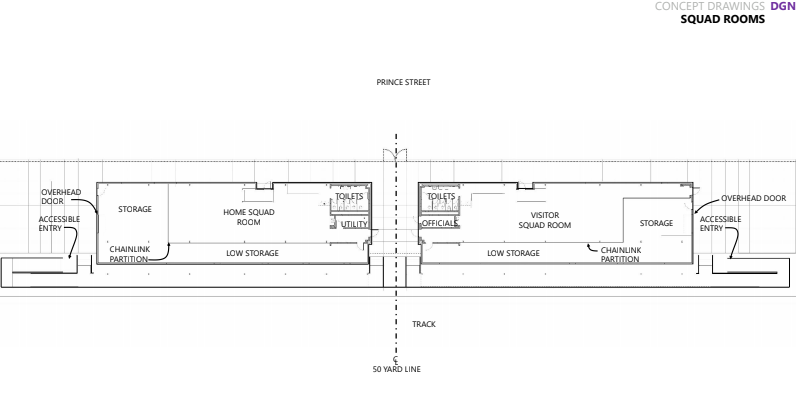 COMING SOON: A rendering of the new squad rooms which will be located underneath the new bleachers. Principal Janice Schwarze talked about the rooms at the 5th period Pulse meeting Oct. 29. (Photo Illustration Provided by Ken Sorensen)

COMING SOON: A rendering of the new squad rooms which will be located underneath the new bleachers. Principal Janice Schwarze talked about the rooms at the 5th period Pulse meeting Oct. 29.

Once a semester during each lunch period, principal Janice Schwarze meets with a small group of students to talk about school-related issues in a series of meetings called ‘Pulse of DGN’. Along with members of the Student Advisory Council, 20 random students are invited to eat pizza and provide feedback on what’s happening on campus.

Schwarze has been hosting Pulse of DGN meetings for three years. This is the first year she has invited students from both an optional sign-up sent out at the beginning of the year and her own randomly selected pool of students.

“It’s an opportunity for [students] to have their voices heard,” Schwarze said. “I think it helps them feel more comfortable with me, too, because now I’m more than just a face in the hallway. It’s more personable.”

“[Ms. Schwarze and Ms. Courington] sincerely consider options when a suggestion is brought up, so you know that your problem or idea is at the very least acknowledged by people who can make that change,” Rowley said. “It helps us [at SAC] because otherwise there would be problems or changes that would go unheard of to us, which is the opposite of what we want to do.”

So far this year, Schwarze says that Pulse has helped her and the construction team figure out some of the smaller parts of the upcoming renovations. During the 5th period meeting Oct. 29, she took the chance to introduce the new bleacher set-up and talk about the new commons area. Schwarze plans to keep the meetings going, and will send emails to selected second semester participants in the coming months.