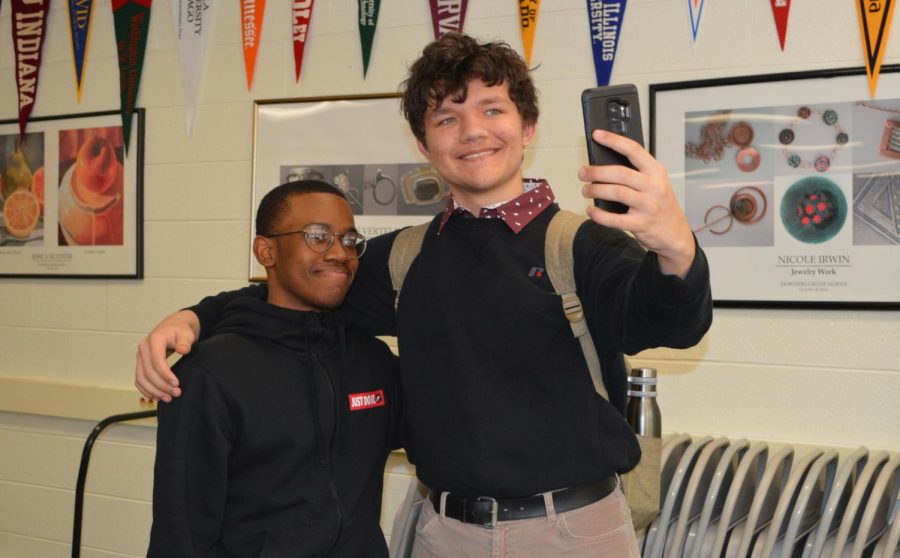 GETTING A PICTURE: Arthur Kot (right, 10, East Leyden) poses for a selfie with his partner, Quentin Mills (left, 10, DGN).

When East Leyden junior Adrian Kaczmarek first walked up to the steps of DGN’s Main Street entrance on the morning of March 4, he was nervous.

He, along with seven other East Leyden students, were visiting DGN as shadows for the day as part of the first annual West Suburban Conference Exchange Program.

When Kaczmarek and his classmates entered DGN, they were greeted by Principal Janice Schwarze, Special Services teacher Michael Pacer, and eight DGN students participating as hosts to each student in the exchange. They introduced themselves to their predetermined DGN partners and proceeded to spend the day together, going to classes and touring the school.

After 6th period, all 16 students came to the College and Career Center to discuss what they learned from the experience and the differences between the two schools. By the end of the day, Kaczmarek explained that he felt welcomed and at home at DGN.

“From my one-day experience at DGN, I can say that the students are much more welcoming to strangers than at East Leyden. I am happy to say my first day at a school foreign to me I felt like I had been at DGN for weeks already,” Kaczmarek said.

The idea of shadowing began last year with then DGN senior Riley Hornilla, who suggested an exchange with Morton East as a way to give students a sense of perspective and kindness. The goal was to get a glimpse of a lower-income area with different demographics, and gain a better understanding of how students can connect with each other, despite having differences.

“I wanted students to come to the realization that we have far more similarities than differences and we need to treat each other with kindness. There doesn’t need to be an ‘us versus them’ mentality when we think of students who are coming from different backgrounds, neighborhoods, and schools than us, because ultimately we are all the same,” Hornilla said. “I felt it was important to promote the mindset of kindness and respect for each other through the duration of the program and spread this mindset throughout the rest of the DGN student body.”

Principal Janice Schwarze was able to put Hornilla’s idea into action by setting up the exchange with Morton East. Schwarze saw it as an opportunity to build awareness and perspective.

“When I was in high school, it was not a very diverse school at all. It wasn’t until I went to college that I learned of people who have different experiences than me. I wanted our students to realize that earlier, so personally, I thought ‘what a great opportunity to connect and build that cultural awareness,’” Schwarze said.

After the success of last year’s Morton East exchange, Schwarze brought the idea to the rest of the West Suburban Conference for the 2019-2020 school year.

“Students and teachers will have a chance to learn each other’s stories by shadowing each other. The exchange program will promote understanding between students and staff in different situations, as well as illustrate all the ways we are more alike than different. This experience will also build camaraderie within the conference,” Schwarze’s proposal from an Oct. 18 WSC Board of Control meeting (a monthy meeting between WSC principals) stated.

By Feb. 21, ten WSC schools had agreed to participate in this year’s program, with the four other pairings being Morton West and OPRF, Willowbrook and DGS, West Leyden and LT, and Addison Trail and Morton East.

Schwarze, along with Special Services teacher Michael Pacer, set up and supervised DGN’s March 4 hosting day. Pacer explained how a positive aspect from the exchange is gaining a greater understanding of the privileges one has.

“Just walking around our building and being made more aware of the things that we have here was great for our students. Walking around and looking at, say, what the construction will be like. Having someone else to share that experience with makes you more thankful for what you have,” Pacer said.

DGN junior Emma Cho, a participant in the exchange, had similar takeaways; Cho explained how gaining a sense of perspective helped her realize the things that DGN offers its students.

“Talking with the students from East Leyden also made me realize how lucky we are to have so many resources for our students—such as the College and Career Center, and teachers that come in early—that other schools may not have,” Cho said.

Cho also explained how many of the positive takeaways from the day’s experiences were rooted in small, subtle moments.

“Every time the bell went off between periods, my shadow Kennedi would burst out laughing. Apparently our bell at DGN sounded much different from the one at East Leyden, and the way ours sounded was hilarious to her. It was the little things,” Cho said.

A difference heavily noted by East Leyden students throughout the day was the gym curriculum. East Leyden has no PE leading course, does not have heart rate days for every gym class, and has a class option that features working out as home and filling the PE period slot with another elective.

Another difference was the College and Career Center; East Leyden students noted that they did not have a designated room for college and career planning, and that DGN does more to provide help for students’ futures.

“I really like this room dedicated to College and Careers. At our school, we just have our counselors and you have to make an appointment to talk to them about college applications, but here you can just come in and get help with scholarships or applications or any questions you have,” East Leyden senior Yesenia Diaz said.

Kaczmarek explained that the biggest difference between DGN and East Leyden is the way students relate and talk to one another.

The most significant difference [between DGN and East Leyden] is the overall atmospheres and setting of the schools. I believe that at DGN people are much more open to socializing with strangers while at [East] Leyden many of us are stuck on our phones with tunnel vision,” Kaczmarek said.

The successes of this year’s exchange in the eyes of the students and staff involved reflect the ideas of cultural awareness and its importance that Hornilla intended to bring forth by creating the program.