Humans of DGN: Kate Cesario one of the youngest TED Talkers 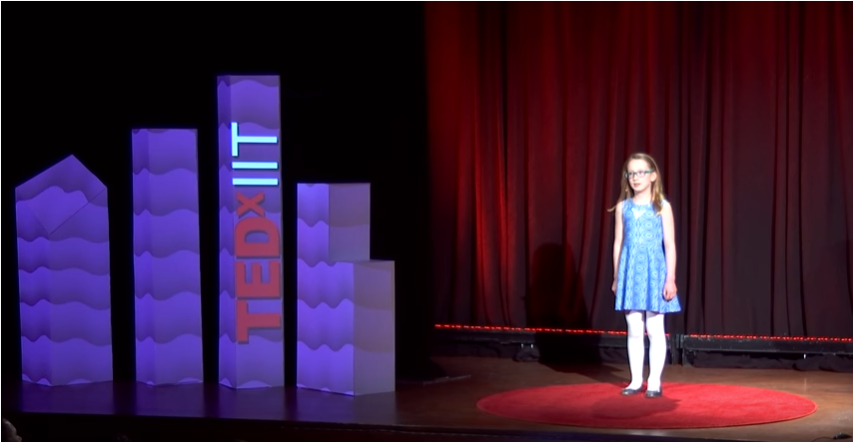 Kids will be kids-and give TED Talks at the age of 10.

Freshman Kate Cesario’s journey to the TED Talk stage began with a contest. She entered a poem of hers into the American Immigration Council’s “Celebrate America” Fifth Grade Essay Contest, and she won for the Midwest region. Her poem (shown to the right) revolves around the theme of immigration.

“I had a friend that was from Iraq, and so I thought I would write something about her because I knew about what was going on there. I felt really horrible that she had to deal with that. She had to move here since it’s a war zone there,” Cesario said.

As the winner, Cesario got to read her poem at an American Immigration Council event. A woman associated with TED approached her at this event and invited her to give a TED Talk at an upcoming conference.

“I was a little bit nervous when she asked me. I’m very shy, so I was a little scared,” Cesario said. “I didn’t realize at first how big of a deal TED Talks were. I didn’t even know what a TED Talk was at that point.”

Cesario gave her TED Talk in August of 2016 as a fifth grader. She began her presentation reciting her poem, and she then continued on to explain the meaning behind it.

“The people that chose my essay thought it was unexpected that a ten-year-old could show such empathy for something she’d never experienced, but, the truth is, caring about people isn’t a skill that you have or don’t have,” Cesario said in her TED Talk. “It’s something that we can all practice and get better at like math, or playing an instrument.”

Cesario captivates the crowd with her message, leaving them on their feet cheering by the end.

“Some people would view an immigrant like Tiba (her friend) through a lense of fear, but I think that immigrants are what make us the everything country,” Cesario said.

She shares the major takeaway she got from this experience.

“If you reach out and show empathy, it benefits everyone and improves your relationship with people and allows you to understand what the immigrants that come to the everything country have gone through,” Cesario said.