Cell phones are destroying our generation 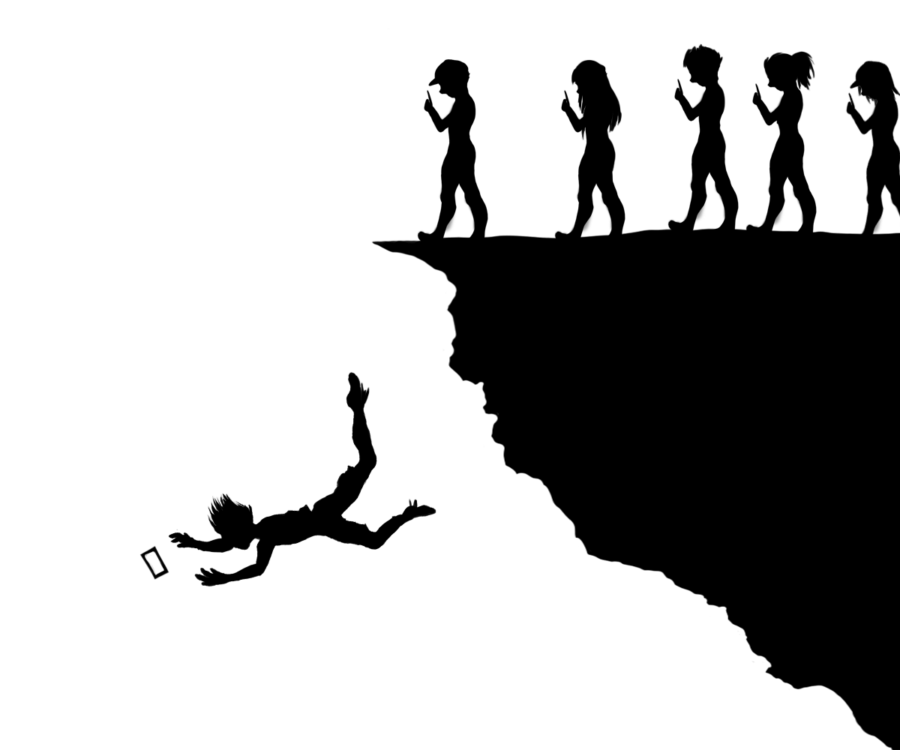 OFF THE CLIFF: a graphic shows the metaphorical effects of cell phones on iGen.

Cell phones: a useful tool that provides easily accessible knowledge, communication, and countless other conveniences. However, these little pieces of technology are also destroying the social side of our generation before our very eyes, and nothing is being done about it.

Let’s begin with the most important issue in the eyes of a teenager like myself. Cell phones have limited the ability of teenagers to do the slightly irresponsible—yet essentially harmless—things that they have always done.

An article from The Atlantic by Jean Twenge titled “Have Smartphones Destroyed a Generation?” highlights that the appeal of independence omnipresent in generations before has been limited by the increasing use of social media.

“But the allure of independence, so powerful to previous generations, holds less sway over today’s teens, who are less likely to leave the house without their parents,” Twenge said. “The shift is stunning: 12th-graders in 2015 were going out less often than eighth-graders did as recently as 2009.”

This means that we are up to less timeless skulduggery than all previous generations before us. What memories are we going to be proud to share with our kids if all we do now is sit inside and send each other memes?

Of course, how bad this decrease in independence is depends on who one asks, but either way, it is clear that us teens are acting less like, well, teens.

Another problem with cell phone use, and social media in particular, is that it is not limited to a specific demographic: kids, adults, blacks, whites, rich, poor—we’re all affected. It’s just our generation (often called Gen Z or iGen and referring to those born after roughly 1996) that is going to feel the long-term effects.

A study conducted by Monitoring the Future states that since the first iPhone release in 2007, rates of sleep, sex, dating, urge to get a license, and hanging out with friends have dropped, while rates of depression, suicide, and loneliness have risen.

In addition, studies from across the world gathered by the US National Library of Medicine state that “teenagers who spend more hours on their gadgets are highly likely to be more at risk of suicide,” and that “low emotional stability, chronic stress, and depression have a correlation with phone usage.”

Even setting the big bad mental health effects to the side for a second, it’s still important to remember that cell phones are also taking away the actual memories we might be able to make as teenagers if we didn’t waste five hours of each day playing Candy Crush or scrolling through Tik Tok.

I’m sure previous time periods were not as glorious as the movies make them out to be, but at least past teenagers talked to one another and lived their lives with heads up high instead of craned down facing a screen.

I might enjoy old nostalgic movies and flipping through my parents’ absurdly cheesy yearbooks from 1983 more than the average kid, but that should not discredit the argument that in some ways the good old days actually were better.

Nowadays, it’s easy to see that anyone who chooses to not use social media immediately becomes a bit of a social outcast; actual in-person conversation has been replaced by text and Snapchat as the best way to get to know each other and stay in touch as teens.

The money-making mindset of technology companies is not helping, either. If you really think about it, commercials about technology are ridiculously manipulative—especially the ones about virtual reality. “All yours” this, “distort reality” that; it’s like they’re telling you that your real life is not good enough as it is, and you have to make it perfect by gluing your eyes to a headset or a screen for hours on end. It’s almost dystopian.

I know what you’re thinking: “okay, boomer.” Listen, I know I sound like I’m being cliché. But maybe some of those boomers have a point once in a while. These threatening effects are shouting at us, and we’re not looking up to listen to them.

I am aware that I am not perfect—I use my phone often just like everyone else. My point is that this mindset is an issue that must be solved soon and it’s easier if we do it together. If everyone decreases their social media use, there will be less to miss and we can actually talk to each other in person.

We all have that five minutes of enlightenment when we are motivated to make a change. But in the long run, the habits continue. Let’s fix this.

I am not one who is going to push for a phone ban at DGN. I’m just arguing that we should all be more aware of just how much we are on our phones and it what it’s doing to us.

Spending less time on your smartphone is a lot easier than it sounds. Taking action could start with something as simple as being aware of your screen time by checking it on your phone’s settings, or something more like setting personal limits or changing daily habits.

Awareness and small steps are all that is needed to slowly create a simpler and more authentic high school social climate, letting us focus more on growing up like the happy, slightly irresponsible teens we’re supposed to be.