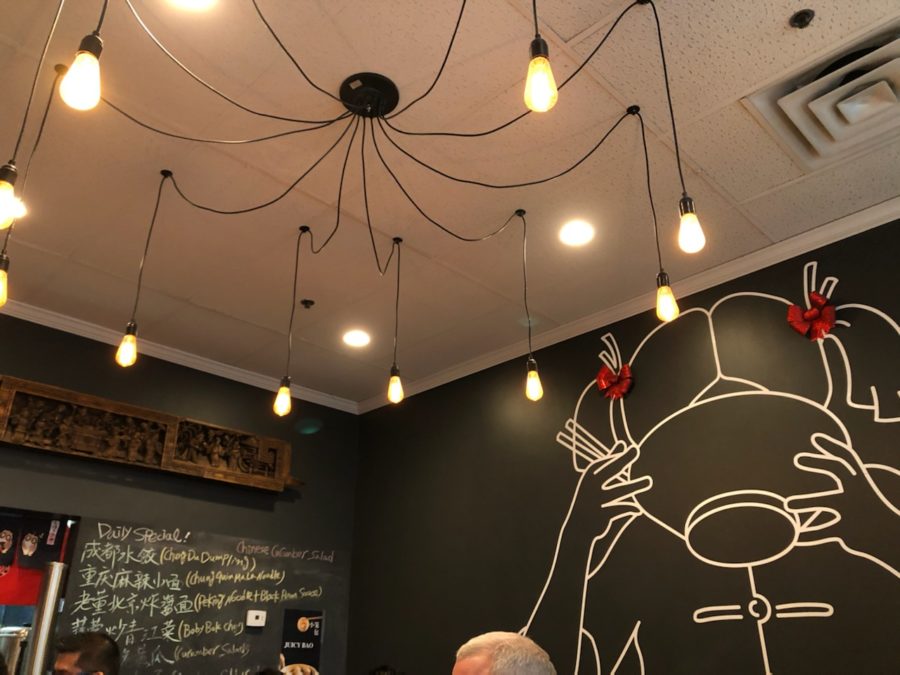 Katy’s Dumplings is an easy place to make assumptions about. With a dimly lit foot spa to its left and a run-down vape shop to the right, you can’t help but ask, “are we at the right place?” when you see it for the first time. However, once you build the courage to step in, the lively atmosphere makes you forget that you are literally feet away from buying a pack of pods.

Katy’s Dumplings is a hole-in-the-wall, family-owned Asian restaurant located in a strip mall at 665 N Cass Avenue that serves a variety of traditional Northern Chinese dishes such as ramen, stir-fried pancakes, and, most importantly, dumplings.

My friends, seniors Sofia Beasley, Sophie Dalen, and Claire Venard, took me to Katy’s Nov. 2 for lunch. Beasley and Venard both have been there in the past, but this was Dalen and my first time.

This being my first edition of “Grubich grub”, let me tell you something important, I love Asian food. My family adventures miles to find the best Asian restaurants. It has become such a norm that my friends often joke that my house smells like curry when they come over. So, when my friends told me about Katy’s Dumplings, I was shocked that I’d never been there before.

The first thing I noticed, besides its questionable neighbors, was the small size. Katy’s seats 28 customers. A kind woman with a thick Chinese accent seated us right away. She walked us through the menu’s Northern Chinese choices and recommended a few dishes.

A mural of a little girl enjoying a bowl of ramen covers a wall, and a modern light fixture fills the ceiling. It feels as if you are right in someone’s kitchen.

“I remember being surprised that there was a menu written in Chinese on the wall. Every person working in the restaurant appeared to be of Asian descent. It was some of the most authentic food I’d ever tasted.” Venard said.

“We ordered too much. Oh my god,” Beasley said in a panic. “These portions are huge. You could order one dish and eat it for three days.”

She wasn’t wrong. Our six dishes covered our table, but we weren’t complaining. Each item was drool-worthy.

The first victim was the crab rangoons. We cleaned them within minutes. They were crisp on the outside and a balance of crab and cream cheese on the inside.

Next, the scallion stir fry pancake. The closest thing I can compare them to is a crispy hash brown, but flattened down and filled with scallions and aromatic garlic. The best way to eat them is to dip them into ramen, I used the beef noodle soup.

However, when Dalen ordered the beef noodle soup, she failed to recognize the red hot pepper next to the name on the menu. It was so spicy that the smell burned our noses. Spiciness aside, I thought it was delicious. The homemade noodles were amazingly tender and soaked up the flavor of the broth.

The pork fried noodles and vegetable fried noodles were the same homemade noodles covered in Katy’s signature sauce topped with their respected vegetables or beef. This was similar to other noodle dishes I’ve had in the past. They were good, but nothing unique.

And, last but not least, pork dumplings. The restaurant is named after its dumplings for a reason. They came out on a tray, the wrapping unexpectedly a light green color. Nonetheless, my friends and I all agreed that they were some of the best dumplings we’ve had. If you go to Katy’s Dumplings, you have to order their dumplings.

I’d like to announce that Katy’s Dumplings is the first Asian restaurant in the Downers Grove area to receive the Grubich seal of approval. It proved to be a welcoming, family-style place that serves authentic Chinese dishes.