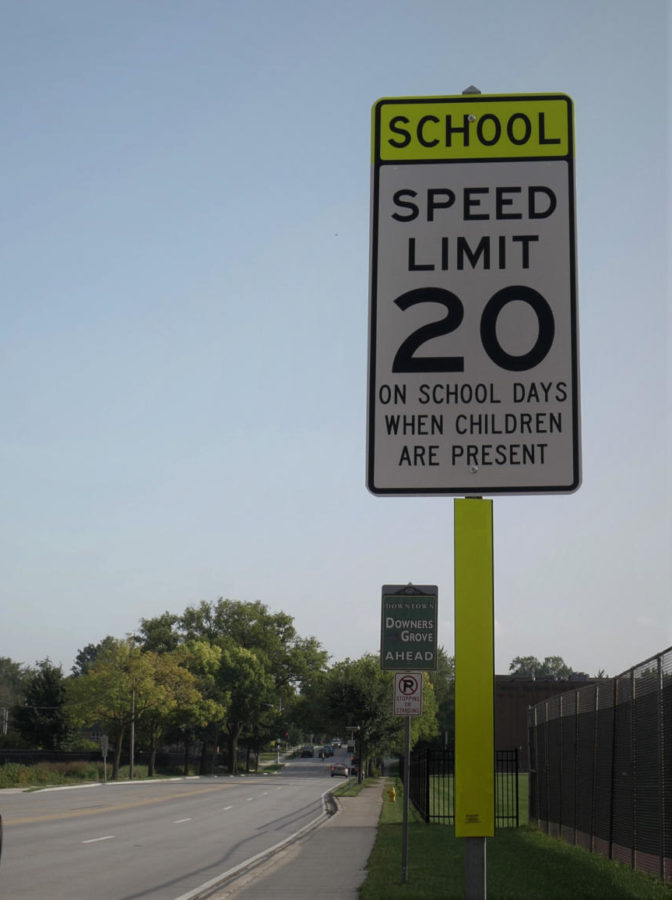 SCHOOL ZONE: A sign placed near the Main Street crossing warns of the speed limit change, from 25 miles per hour down to 20, in the upcoming area.

At the end of February, efforts to create safer crosswalks around DGN began after the death of junior Beth Dunlap. Beth, who was fatally struck by an imparied driver, obeyed the pedestrian laws and was deemed not at fault for the accident. Even though she was being lawful, measures have since been taken to generate a more secure traffic environment for both students and drivers.

Specific changes to the speed limit took place right after the school year ended, with the largest being the Main Street speed limit decreasing from 25 mph to 20 mph starting on Aug. 8. In addition, yellow “school zone” banners appear on the top of the signs around the property.

By Illinois law, only elementary schools mandate a “school zone” for roads surrounding the school.

“We don’t have to have a school zone, only elementary schools do. We had a petition to get a school zone, and the village had to agree with us,” principal Janice Schwarze said in an Omega interview.

In addition, sidewalk safety stencils have been placed on both sides of the Main Street crossing in front of DGN.

In correspondence with the village of Downers Grove, temporary orange signs were posted at both entrances of the school zone, flashing messages suchs as, “school zone,” and “reduce speed.”

On, Sept. 5, a safety forum took place in the auditorium going in depth on the subject matter. The community, staff, and board members alike were present.

Schwarze kicked off the meeting with hopes to enlighten everyone in discussing the changes already made and ideas that could be used in the future.

In alignment with Sam Schwartz, a transportation and safety firm, District 99 and the village of Downers Grove created an interactive map where community members can post their ideas, thoughts, and concerns in regards to areas around town. These areas include intersections and roads in need of improvement

While the majority of the comments filter around the school, this map includes improvement ideas across town. Hundreds of comments posted on the District 99 website evoked concern for Main Street crossing and intersections near the school.

“Please put a four way stop at Lincoln and Highland Avenue,” an anonymous commenter said. “It is very dangerous, fast drivers on Highland do not always pay attention.”

The interactive map is not limited just to DGN, but is open to comments regarding the safety of the DGS roads and intersections as well. While most of their students do not cross a major road, trouble with pick-ups and drop-offs promote difficulty among parents, faculty, and students.

The village of Downers Grove  and DGS closed on an idea regarding crossing at one of their busiest intersections. In the spring of 2020, they will be adding a stoplight at 63rd Street and Springside Avenue located at the northwest corner of the campus.

Ideas presented and implemented thus far proved to be efficient in maintaining safety and involving community members. The interactive map will make final conclusions in November when they meet for a second safety forum taking place on Nov. 14 at 7 pm. The event is open to all community members.

“I do think things have gotten better, and one of the best things about it is that we’re going to be defining trouble spots that we never would have known of [before],” Schwarze said.