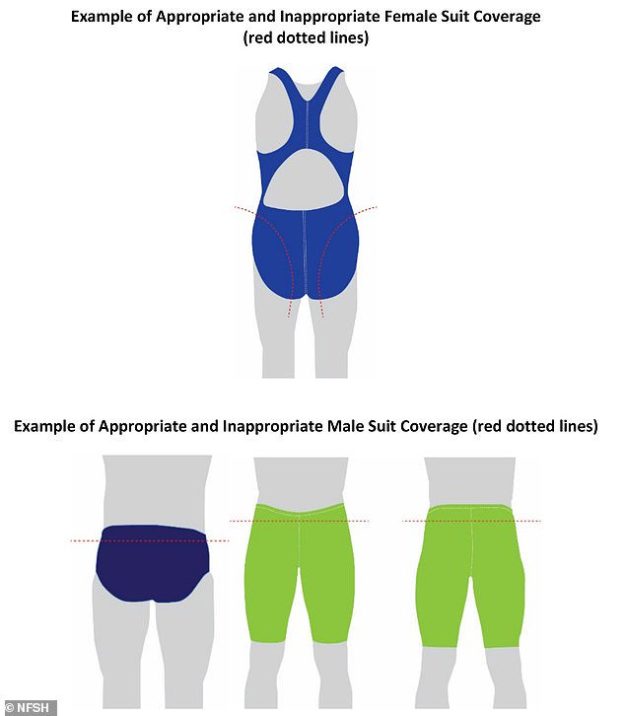 New rules regarding swimsuit coverage went into place at the beginning of the 2019-2020 swim and dive season, rustling the feathers of athletes and coaches nationwide.

The 2019-2020 National Federation of State High School Associations (NFHS) rule book states, “A competitor shall not be permitted to participate wearing a suit that is not of decent appearance.” The requirements vary for boys’ and girls’ suits, but the rules for both explicitly require that athletes must “cover the buttocks”.

Girls’ swim coach Judy Busse believes that the change was not sparked by any specific incident, but rather a gradual shift in swim attire.

“It’s a modesty rule. There’s no question that the cuts of the suits are more exposing than they used to be,” Busse said.

Busse feels that these changes will have very little effect on her team.

“I’m a rule follower for the most part. This is a rule that I, as a coach, have to uphold. It’s not a problem with us,” Busse said.

Athletes on the DGN swim team understand the rule and its cause, but captain senior Libby Benge conveyed that many of her teammates consider it unreasonable.

“The suit that they want us to wear, they don’t even make that. What are we supposed to wear? We don’t even know what to expect,” Benge said.

Boys’ swim head coach Adam Bruesch believes that while the rule applies to both genders, it appears to target female athletes more than their male counterparts. Bruesch attributes this to the style of suits worn.

“So, while I can’t say that women are expressly targeted, I do believe that they will be significantly targeted more than boys. I think part of that has to do with old double standards for appropriateness between men and women, in a changing world perspective,” Bruesch said. “I don’t see an easy path for this rule that should lead to nothing but problems, and ultimately has very little to with the actual sport.”