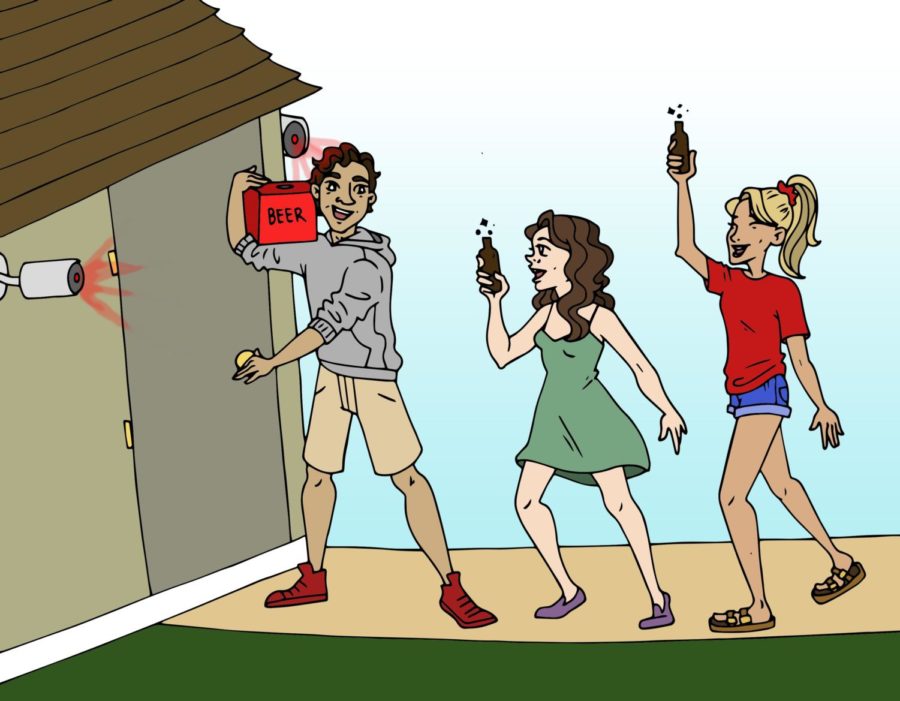 2018 alumna Lily Smith* found herself in a panic as she stood inside the prom house her friends had rented. There were security cameras, and she’d just entered the premises with a group of 40 teenagers and cases of alcohol. The phone rang— it was the owner of the house telling Smith and her friends to leave immediately. They rushed out, Smith scrambling to figure out what to do and where to go.

Frequently deemed as an unspoken part of the prom experience, yet not affiliated in any way with the school-sponsored event itself, prom houses are often as important to some seniors as the night of prom.

Smith and her friends rented their prom house from the rental site VRBO, which requires that users are 18 years of age but allows each rental property to have separate rules up to the discretion of the individual owner.

“The house that we booked did have an age requirement that was 21 or older, but no one was 21 in our group so we lied,” Smith said.

Smith’s group initially had 60 people planning on attending their prom house party, but due to guidelines that limited the number of people allowed in attendance, they had to cut the list down to 40— still over the allowed number of guests.

“In order to get the house that we wanted… we couldn’t exactly tell the owner the full truth. It was more of a white lie,” Smith said.

Fully aware that there would be alcohol and substances present at the house, Smith hoped that no one would get caught.

“When we first got to the house we all made it inside, but the owner actually had cameras in his house and he was watching us the whole time. He called us and told us to get out,” Smith said. “I was definitely worried about getting in trouble, but I never expected the guy to have cameras.”

Smith and her group of friends were forced to split up, some traveling to family lake houses and others booking stays at indoor water parks.

Most online booking sites have policies similar to that of VRBO, where the rules and regulations of each rental are up to the owner.

Airbnb, the booking site used by senior Grace Robbins* to rent her group’s prom house this year, requires the guest to provide their name, email, phone number and payment information. They also must agree to follow any house rules. A profile photo is “encouraged, but not required” according to Airbnb’s policies.

Owners can make the age limit for renting their property whatever they choose, although Airbnb’s nondiscrimination policy states that “if any guest feels they have been discriminated against because of their age, we will immediately investigate and help the guest find a place to stay.”

Robbins wanted to make sure that her group rented the prom house legally, abiding by all of the policies and guidelines, but being able to accommodate for everyone attending wasn’t an easy task.

“I was getting too many requests from people. They want a hot tub, they want this…it’s so hard to find not only a house that has all those things that people want, but also one that’s big enough to sleep a bunch of people,” Robbins said.

The stress Robbins experienced didn’t cease once her rental was finally booked, and she emphasized that there is always a chance of something going wrong.

“If there was an accident or someone got hurt, we might have to reach out to another party— whether that be the police or the hospital,” Robbins said.

Prom houses are no new challenge for administration. The potential dangers this activity can cause is one the school doesn’t take lightly.

The official 2019 senior letter emailed by Principal Janice Schwarze to graduating students and their parents on April 1, reviewed information and protocols regarding “end-of-the-year festivities” which includes prom houses.

“We are always concerned about substance use and the devastating impact it can have on our students and school. Any drug or alcohol use or possession will result in exclusion from participation in any graduation events and activities. Parents whose teen is attending a party are encouraged to contact the host parents to confirm adequate supervision and adherence to laws,” Schwarze stated in the letter.

Schwarze felt that addressing this issue to graduating students and parents was important to attempt to prevent any complications regarding prom activities.

“We have been fortunate here at North that we have not had problems, but in our society, we hear stories every year about bad things that happen as part of prom celebrations,” Schwarze said in an Omega interview. “The last thing we want is for a student to not be able to walk at graduation because of a bad choice— or worse— to lose a student to a tragedy.”

These guidelines provided by the school are often not followed by senior students despite the warnings.

Student Assistance Coordinator Keith Bullock who coordinates alcohol and substance prevention programs, reminds senior students that the school wants them to remain safe even as their time in high school comes to a close.

“They feel like they don’t have those responsibilities or obligations to school anymore,” Bullock said. “We’re not done with you yet. We still continue to care about students’ well-being and safety.”

Bullock acknowledges that ultimately, the decision regarding students’ post-prom activities and behaviors lies with the students themselves and their parents, and that sometimes parents even endorse or support these behaviors.

“The idea of ‘safe alcohol use’ in high school is a misperception. I think parents want to prepare their students for life after high school, but research shows that students who drink in high school are actually more likely to continue drinking and binge drink,” Bullock said.

Bullock also noted that despite the best possible option for safety being to not use alcohol or substances, there are ways that students who find themselves in these situations can protect themselves.

“Students need to be prepared to call 911 in an emergency. Many municipalities have ways of protecting students from litigation. If someone is unresponsive, if someone’s not waking up, then getting them medical attention would be important,” Bullock says.

All 50 states have Good Samaritan laws that protect those giving reasonable assistance to someone who is ill or in danger, meaning that students can feel more comfortable calling for help without fear of getting in trouble if something were to go wrong.

Senior Grace Costello, who is attending a prom house but is choosing not to participate in any alcohol or substance use, believes most students are unaware that Good Samaritan laws exist, and that students over-exaggerate the necessity for drinking post-prom.

“If there was a situation where someone was hurt I feel like that would not be a first thought for people,” Costello said. “Personally, I just think I’d rather live in the moment. I’d rather be fully there rather than on something.”

Costello feels there are many additional pressures that go hand-in-hand with the event of prom.

“I think there definitely is a pressure to party. It’s kind of a thing, like after prom that you’re supposed to go crazy and have sex and drink and that sort of stuff,” Costello said. “I see that stereotype being fulfilled by a lot of people. I know people who want to go to a prom house just to get drunk.”

Prom weekend presents many choices to seniors regarding responsibility, values, friendships and relationships, and how they end their high school career.

“Don’t be afraid to help out and do your part,” Costello said. “Peer pressure is a thing— but it’s only a thing if you let it be a thing.”