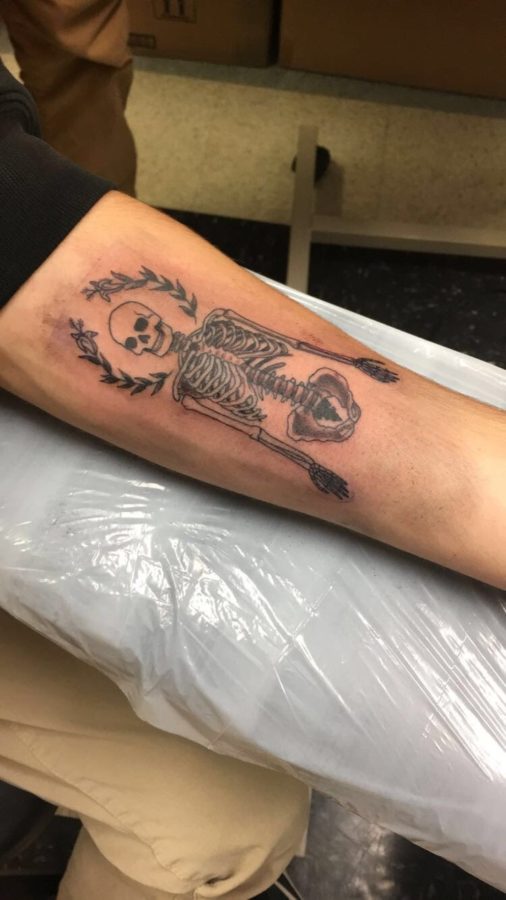 Senior Gonzalo Alvarado walks into Downers Grove tattoo with 20 dollars less than the agreed upon price for his tattoo. He hasn’t told anyone, but he hopes to get the death dates of his mother and grandmother across his chest in roman numerals. Luckily for him, his artist is having a good day, believes his tattoo is meaningful and decides to give him a discount.

Alvarado didn’t want anyone to influence his opinion on what would remain on the body forever. When he went back home, his family loved the tribute he has paid to the important women in his life. During wrestling, Alvarado believes his tattoos intimidate his opponents, but on the beach strangers greet him with compliments.

“I really wanted a tattoo. But I went alone because I didn’t want anyone’s opinion except mine and I would just wait and see what happens after,” Alvarado said.

On the opposite side, Alvarado gave himself a stick and poke tattoo of a banana on his upper thigh that held no meaning. Now it reminds him of the person he was with, but at the time it was just a random practice tattoo. However, he said it didn’t hurt any more than a regular tattoo and he does not regret it at all.

“Every time I was poking [the skin] I could hear it popping and it did not feel good,” Alvarado said.

As seniors turn 18, some choose to get tattoos shortly after their birthday. However, senior Hailey Ramirez’s family maintains a tradition of getting tattoos on their 16th birthday. She chose to get a rose inside of a box in between her shoulder blades. Ramirez feels she gets more judgement for the fact that it has no meaning rather than the fact she got it at 16.

“Everyone asked what the meaning is usually behind your tattoos and sometimes you just get them because you want them. I feel like people did judge me a little bit,” Ramirez said.

After her 18th birthday, Ramirez decided to get two more tattoos. One is a matching black and white rainbow tattoo with her mother who has matching tattoos with all of her children.

“It’ll make her think of me and it shows that she supports me and my lifestyle. I feel like now being a senior everyone gets tattoos so I don’t think [I got as much judgement for that one],” Ramirez said.

The other holds more personal meaning to Ramirez. “La vie est belle”, or life is beautiful, is tattooed across her rib cage. While the most painful of all three, it serves Ramirez with an important daily reminder.

“It’s something to think about if you’re sad and you think the world is ending and you’re just being dramatic. You just have to ground yourself and step back and realize that everything’s going to work out and that life is beautiful and it’s not out to get you or anything,” Ramirez said.

Senior Brian Kosek’s tattoo of a skeleton with a leaf halo is highly visible on the underside of his left forearm. While many see it daily, he tells people it has no meaning. Kosek told The Omega there is a secret meaning, but would like to keep it to himself.

“I think I get a weird reaction because people think it’s going to be on your body forever so it has to have meaning,” Kosek said. “I don’t really care what people think about it because I like where it is, I like how it is and I like what it means and if other people don’t like it that’s their choice. I think people’s opinions of me have changed but I don’t mind that much.”

Senior Emily Bollinger’s stick out more than others as five inch long treble and bass clefs on both wrists are hard to hide, but she doesn’t try to hide them either. They remind her of her love for music and allow it to be a part of her forever. She would disagree with anyone who says getting a tattoo is not painful.

“I feel like people have a certain respect for music and academics, so people understand it and I don’t really feel judgement,” Bollinger said.

While each tattoo design differs, all interviewed agreed they would like to get more tattoos in the future. They hope that people who want to get a tattoo think often about the design, but also about their tattoo artist.

“I think that everyone’s entitled to their own personal opinion because obviously there are tattoos that I’m going to look at and I’m going to be like why did you get that on yourself. But, it’s all open to people’s expression and what they feel and how they want to look in my opinion,” Ramirez said.