Artist of the Month: Fredo Disco 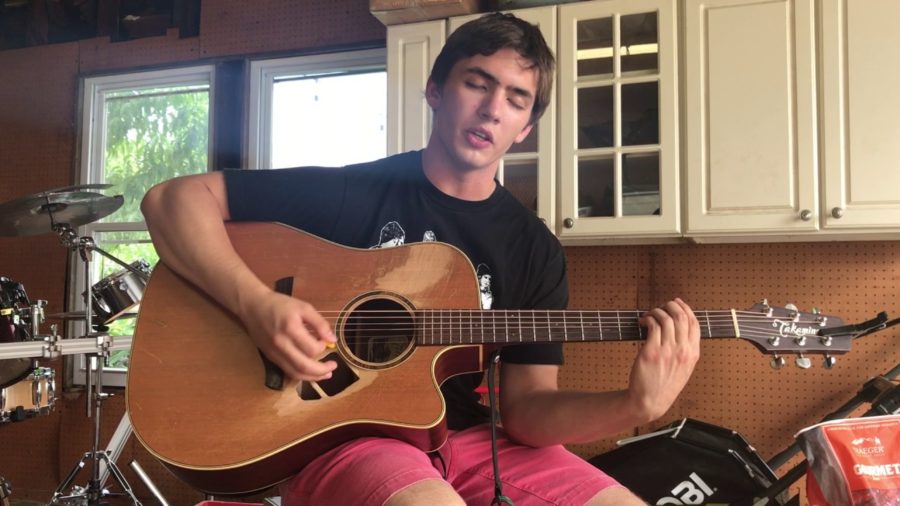 Strumming a Tune: Fredo Fosco (12) plays a song for his YouTube audience. Performing under the moniker Fredo Disco, Fosco has amassed over 2,000 subscribers on YouTube.

After a night of playing open mics around the town, Frederick Fosco (Fredo) goes home, pens a couple lyrics to use for his next song, and goes to sleep. The next morning, Fosco meets up with a few friends and records the song he thought up the night before. When he gets home, he uploads this song to his Soundcloud, where hundreds of his followers will hear it shortly. This process is becoming routine for Fosco, who has now released over twenty original songs.

Fosco was introduced to the world of music at the age of five when he started taking violin lessons. Fosco initially disliked music, but after moving to guitar lessons and learning there was more to music than just classical music, Fosco grew to love music.

Thirteen years later, Fosco, now going by the moniker of Fredo Disco – a name inspired by his phone’s autocorrect malfunction – is writing and releasing his own music. Describing his work as “Emo Folk-Punk,” Fosco writes songs that are relatable for the high school crowd. “I write a lot about breakups, stuff like that. But I also . . . write a lot about high school, just in general. I’ve gone up and down with hating high school and loving high school, just at different times of the year,” Fosco said.

At a time in life when the ups and downs can come so fast, Fredo’s process of releasing music reflects these highs and lows just as much as his lyrics do. “Whenever I write a song, I try to push it out as soon as I can, so people listening to the music can sort of go along with the ride”.

Fosco’s music hasn’t been without consequence. His most recent track, entitled “Stay Classy”, takes jab at his rival, whom which Fosco found himself in the middle of a “twitter beef” with. Releasing this track early in the morning on Sept. 3rd, Fosco’s timely manner of pen to release makes it easy for fans to follow exactly what is going on in Fosco’s life.

Fosco’s original music on his Soundcloud has recently received a fair share of attention. As of Sept. 6, Fosco has amassed over 50,000 plays on the Fredo disco Soundcloud account.
For inspirations, Fosco cites artists such as Mom Jeans, The Front Bottoms, and Walter Mitty and his Makeshift Orchestra.

In the future, Fosco is looking forward to playing more live shows in the area. Fosco has tried to book gigs before, but many venues are hesitant to hire high school aged artists due to the fear of underage drinking and low audience turnout. Despite this, Fosco is hoping his new found popularity will be able to change venue owner’s minds.