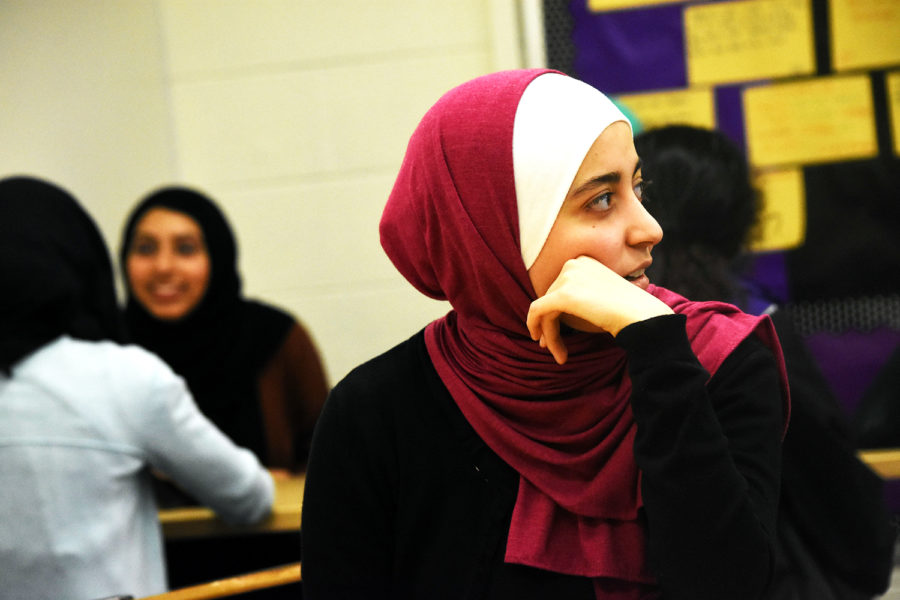 As junior Anam Adil walks into the Muslim Student Awareness meeting, the weight from her day rolls off her shoulders. She looks around and sees people who support her or are interested in her religion. She feels at home.
This group, Muslim Student Awareness (MSA), aims to create a comfortable environment for all students and to keep everyone informed and safe. Recently, they have focused on the travel bans from six primarily Muslim countries put into place by Donald Trump and his cabinet and how it affects Muslims. Adil regularly attends MSA as this group has positively impacted her experience at DGN.
“With the new executive orders, the group has primarily been trying to express the idea that love trumps hate. Despite the religious attacks and of course, the ban, it is important to remember that how we singularly act is how we can change what people think about what Islam is. After all, there are more good people in the world than bad. If we continue to love, show respect to every other culture/religion, and work hard to become the best possible version of ourselves, than we’ll be setting a positive outlook on what the religion is truly about,” Adil said.
Adil and the other members believe that it is crucial for the student body to know that this group is not religious. It is an informative club about the traditions and life that come with being Muslim.
“It’s been difficult to get food drives and events set up, primarily because most people think it is religion-oriented. However, [MSA] strives to help social causes and promote an overall positive outlook. For example, a food and clothes drive for the needy in Syria. Now one may immediately conclude that it’s all for Muslims, and ignore that the drive also supports Christian Syrians in need of help as well. In the future, I hope this group will help people realize that acceptance of each other not only brings us together as a school, but as a community in a world outside of school as well,” Adil said.
MSA is headed by social studies teacher Justin Ashton. He helped start the club three years ago with former students. Ashton feels that the club is mostly run by the student leader.
“I think [MSA] does a good job about making sure people are aware of Muslim culture because I think most people are fairly uninformed about it. I think most cultures unfortunately get negative press and certainly the Muslim culture is part of that in our country. I think they do a great job of trying to reach out to people,” Ashton said.
Junior Maddie Samuels has attended MSA meetings, even though she is not Muslim. She believes it is particularly important to attend now as she feels the world seems to be against them.
“I believe this group has taught me more about Muslim culture and also given me hope for enlightening others about Islam as well as breaking the stigma surrounding it,” Samuels said.
Senior Fazal Mohammed, who is a student leader of MSA, feels that as an individual he does not face the same challenges as Muslims around the country, however the travel ban still affects him.
“In [Downers Grove] we don’t face the same problems as a lot of other Muslims around the country because this is a well-educated area. We don’t face some of the criticism and hate that others are facing, but [the travel ban] hits home because we have family that gets stopped at borders,” Mohammed said.
Mohammed encourages anyone to join their group to show support for Muslim students and staff, as well as other minorities. He hopes that this group will help inform the student body of a different culture, as well as help Muslims who may feel uncomfortable at DGN.
“It’s good to talk to other people who face the same problems and struggles as me. Just having a group who are like you is more comfortable in any situation,” Mohammed said.