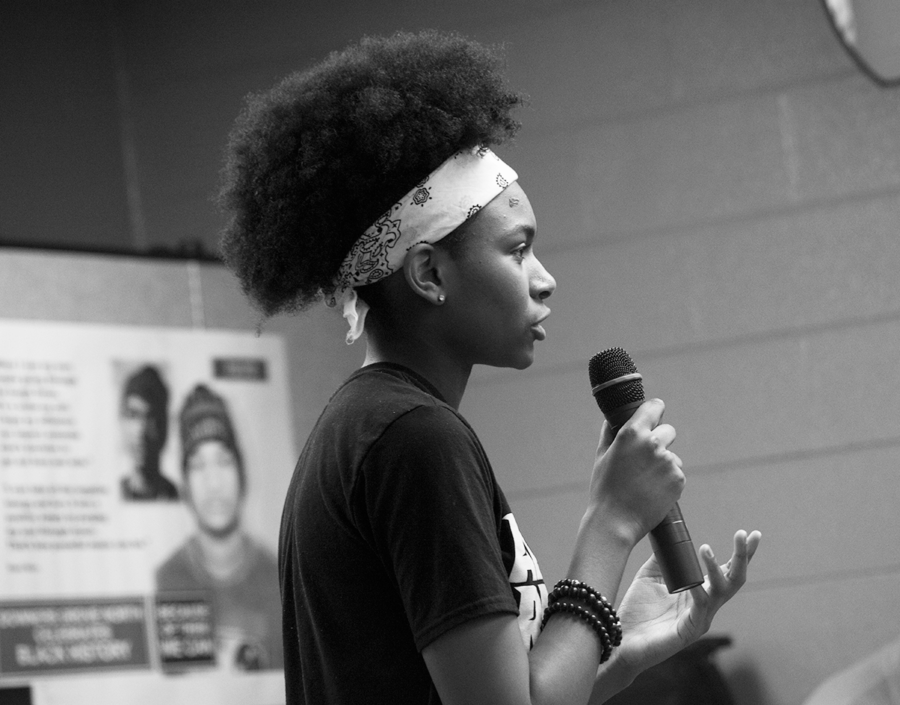 In celebration of Black History Month this February, students and teachers took part in the second annual open mic, featuring pieces from popular black poets along with students’ and teachers’ original works. Lead by English teacher Britni Mitchell and ISU hip literature professor Daniel Cochran, students and teachers shared pieces from famous poets such as Tupac and Kita Dove.
In years past, Mitchell invited friends with slam poetry experience to celebrate poetry month in April. The read-in was moved to February last year to incorporate black poets for Black History Month.
“It was brought to my attention that NCTE (National Council for Teachers of English) hosts a read-in in honor of Black History Month to commemorate black authors and black literature,” Mitchell said.
Mitchell invited Cochran to emcee the read-in, as he used to compete in slam poetry on the national level.
“He was the facilitator of open mic when I was a student at Illinois State University, and I know all my other spoken word friends through him,” Mitchell said.
At the read-in, Cochran emphasised his goal, which was to maintain a safe sharing environment.
“One thing we’re not here to do is compare. What you brought is what you brought,” Cochran said.
Students were encouraged to ‘leave a line and take a line’ which was Cochran’s way of encouraging others to share words of wisdom or ideas. At the end of the event, all the lines that were contributed were strung together to form a poem.
Not only did the read-in give students the opportunity to share pieces from famous black poets, but it gave students the chance to share their own writing.
“There are kids who write all the time and not even their friends have known it, and they just totally kill it when they get up there. That’s my favorite part,” Mitchell said.
Junior Prevail Bonga shared an original piece titled “Spoken Word.”
“This piece brings up important issues that people in the African American community have faced and continue to face. Things like slavery, segregation, mass incarceration and underrepresentation are things that people of color, particularly African Americans, see on a day to day basis,” Bonga said.
Juniors Ahmad Winters and Jarvis Patrick performed their original song titled “Made it.”
“The read-in means a lot to me because it gave us a chance to show everyone something that we enjoy doing after school. If it was not for the read-in I doubt we would have ever performed at the school. So it meant a lot because we got to express ourselves,” Winters said.