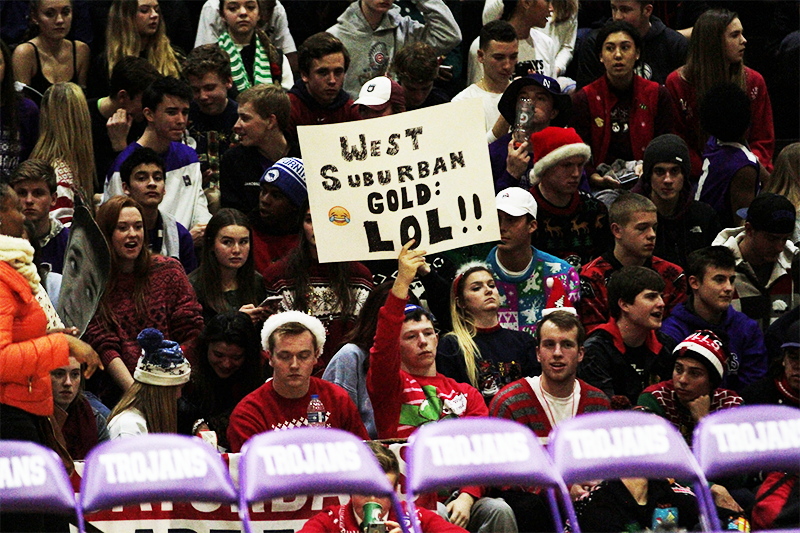 During the regular season finale against Hinsdale Central on Feb. 17, senior Ryan Radomski muttered “Fire Hoiberg” as Chicago Bulls head coach Fred Hoiberg and his wife Carol Hoiberg, whose son was the point guard for Hinsdale’s basketball team, walked past.

Carol Hoiberg heard Radomski’s statement and, according to Radomski, commented on the appropriateness of his statement, as well as asked his age. Radomski answered that he was 17. The exchange between Carol Hoiberg and Radomski ended, and the game began.

Later in the game, a “Fire Hoiberg” chant began while Hoiberg’s son was shooting a free-throw. Students chanted “Fire Hoiberg” at an earlier game which Hinsdale Central hosted on Jan. 21, where the Trojans lost 51-68.

“The chant first started as an expression of our displeasure towards the team’s recent games. A lot of us [students] were not Hoiberg’s biggest fans with his recent results, so we chanted ‘Fire Hoiberg’ to express mine and the other student’s feelings,” Radomski said.

On Wednesday, Feb. 22, Radomski was called down to the deans office, where he talked to Dean Timothy Tilton about the events of the game.

“I did not expect that at all. When I got the Dean’s slip, I was like, ‘What could this be for?’” Radomski said.

According to Radomski, Tilton informed him that his consequences would include a letter of apology to the Hoibergs and Principal Janice Schwarze and a four-hour detention to be served on Feb. 25. During the initial process of deciding what consequences Radomski would serve, Tilton told him he might be banned from the remaining basketball games. Later on, Tilton gave Radomski permission to attend future games.

In response to the Omega’s request for an interview, Tilton declined an individual interview, but the deans office emailed a response suggesting the Omega staff refer to a portion of the school’s student handbook. The section states that students must “conduct [themselves] in a manner that reflects courtesy, decency, and sensitivity to the rights and needs of others.” This means if any student gets caught breaking the rule, they can and may be held accountable for their actions.

“A school can have all of the policies it wants, but those policies can’t override the Constitution or state law. A school can encourage or promote optimal behavior, but they can’t use punitive authority to enforce aspirational standards of politeness. ‘Discourtesy’ is not where the First Amendment ends, and plenty of speech can be discourteous yet still constitutionally protected, even in the school setting,” said LoMonte in an Omega interview via email.

“The benchmark for student First Amendment rights is always the Supreme Court’s Tinker case, which says that students have the right to speak freely at all times — even on school grounds during school time,” LoMonte said. “When you’re talking about a high-profile, well-known person, there’s more latitude to criticize that person without running afoul of the First Amendment, though that’s of course not unlimited.”

This type of behavior is not uncommon at basketball games. Senior Angelo Marra experienced similar events during a game against Glenbard West.

“I remember at Glenbard West when we went into double overtime the fan section was yelling things at me like trying to roast me for my hair or shoes,” Marra said. No one was punished for these occurrences.
Radomski served the detention and wrote his letters, but he is not sure that the punishment was justified.

“The punishment was over the top. In my opinion it should have been nothing. I was just trying to be funny and it turned into a big deal which it should have not,” Radomski said.