Based on the debate, neither of our presidential candidates are fit to run America 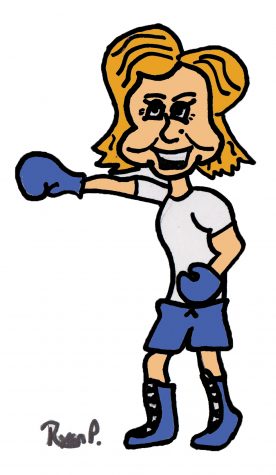 During the debate that took place at Hofstra University in Hempstead, New York, both Donald Trump and Hillary Clinton failed to impress. . . well. . . anyone.

Neither of the candidates said what they would do for the country as a whole as much as they pointed fingers at one another or tried too hard to appeal to the voters.

Before the debate took place, voters were expecting Trump to prove his leadership abilities and his potential to run the country. Unfortunately for America, neither one of the candidates did so.
Trump took shots at Clinton and brought up points and “problems” that were irrelevant to what actually needs to be focused on in our country. All the while, Clinton tried too hard to be relatable and appeal to the youth, when in reality, she is just a 68-year-old woman who is almost absolutely clueless about modern trends and happenings.

One thing that Trump said during the debate that ticked me off in particular was when he compared America to a third-world country due to our outdated airports. Maybe it’s because he is surrounded by his billion-dollar social bubble, but I’m not so sure Trump actually know what a third-world country actually is. I can’t imagine a man so ignorant to real world problems being the leader of our country.

Meanwhile, Clinton is almost as humiliating and lame as Donald Trump. Before the debate, Clinton sent out a tweet trying yet again to relate to young voters. Her tweet read “How does your student loan debt make you feel? Tell us in 3 emojis or less.” In response, other Twitter users tweeted things like “You know what people who went to college can use? Words.”

Throughout the debate, both candidates also continuously showed their immaturity and childlike tendencies. Trump criticized Clinton for preparing for the debate. In retaliation, Clinton accused Trump of not paying his taxes and that a lot of America’s money is being wasted on his ideas.

This is just some of the back-and-forth that makes us question: when both of our candidates are arguing like four-year-olds, are either one of them really fit to run our country?

Clinton and Trump are two very different people that are on complete opposite sides of the political spectrum, which leads to more head butting than voters were already anticipating. Throughout the debate, both candidates clashed on topics from the Iran deal to trade policy to Trump not paying his taxes.

I don’t normally watch these debates, because I am unable to vote yet or because I find it boring to hear and watch candidates argue about ordeals that I am unfamiliar with. To watch this debate with two of the most controversial candidates made me feel embarrassed for their lack of shame and maturity.

According to Vox, Trump interrupted Clinton 51 times during the debate, while Clinton only interrupted Trump 17 times. On Trump’s side, continuously interrupting opposing candidates is not a way to gain new voters. When he interrupted Clinton, all I could think about is: if he is elected president, he will not allow any new ideas or thoughts without interruption or input.

In Trump’s defense, Clinton is not much better. Her entire email scandal, where she used her family’s private email server for official communications, rather than official State Department email accounts maintained on federal servers, were alarming to say the least.

In addition, throughout the debate, most of her answers on race relations were mostly head and not enough heart. Her speaking, while thoroughly rehearsed, sometimes seemed a little robotic.
Neither of these candidates, thus far, are really fit to run the country, as they both have been, and continue to be, surrounded by controversy.

On the flip side, some of this arguing could be good for those who are choosing which candidate to vote for, but it can also be considered immature, based on how they handle themselves. With their immaturity comes a lack of respect for the candidates by the voters.

If Clinton and Trump were out to seek respect from voters, they would debate maturely, politely disagreeing with one another and not interrupting each other, rather than point fingers at one another.

The point of debates is not only to propose political ideas, but also to show their personality and temperament. Based on the candidate’s lack of maturity and quickness to blame, I would be afraid to vote for either of these candidates for our next president.