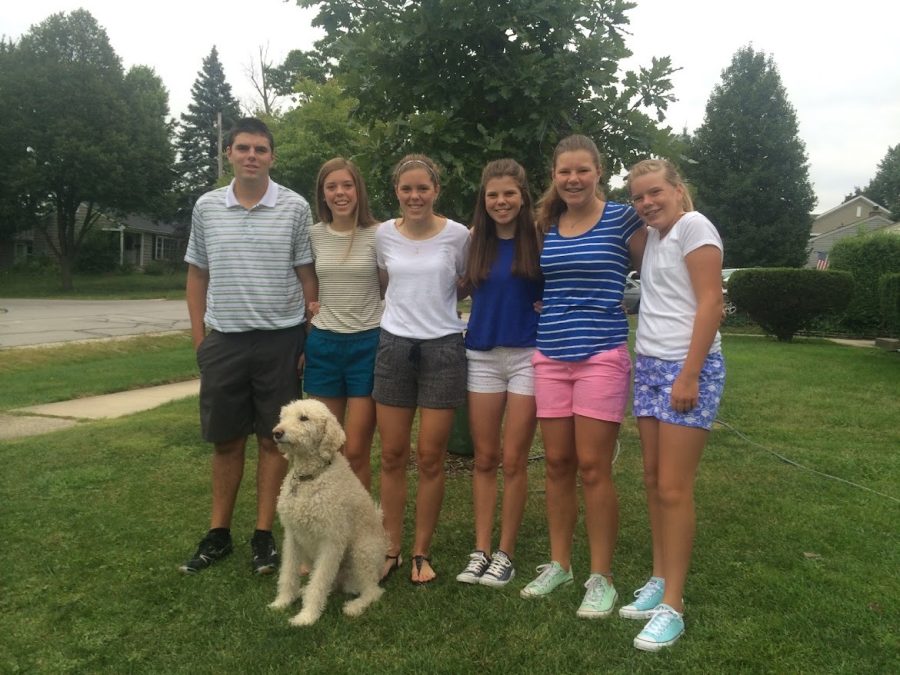 For the past decade, a Miller sibling has walked DGN’s halls, but as the youngest of six, senior Maeve Miller, prepares to graduate, the era closes. The oldest and only boy, Rowan Miller, graduated in 2016, followed by the two twins, Brigid and Colleen Miller in 2017, Margaret Miller in 2018, Erin Miller in 2020 and now, Maeve.
The large family dynamic impacted all of the Miller siblings.

“Growing up in a family of eight, you need to be loud in order to have your voice heard, and because I didn’t have seniority, if I didn’t talk, I wasn’t getting heard,” Maeve Miller said. “It was definitely fun being the youngest, but it has its ups and downs.”

In the past decade, the Miller clan won many awards, leaving their legacy in both the academic and athletic sectors. In 2017, the four Miller sisters in the girls’ basketball program shared laughs and feuds.

“Like most siblings, there were some epic fights in the house. They’re a competitive bunch,” their mom Patricia Miller said.

The siblings were especially competitive on the court.

“It’s going to be weird to not see a Miller in the school or in the building or just around the team. They were really one of the first groups that started changing the girls’ basketball program into [a team] with more of a winning mentality,” assistant varsity basketball coach Jasen Leathers said.

“I don’t think it’s going to happen again, a situation where you’re going to have that many sisters coming through your program. They definitely left a mark; their whole family has.”

For seven years there was always a Miller on the court. The twins played with each other for four years, and while Maeve Miller enjoyed watching their games, losses sometimes caused a riff in the household.

“We were told not to talk to them after a game, but my brother always would say ‘nice shot’ after he knew they air-balled. Just things that would set-off a teenage girl who just played a bad game,” Maeve Miller said. “They would come home after the game and it was like walking on eggshells.”

Although there was tension at times, Brigid Miller attests that sharing her high school years alongside her sisters greatly improved her experience.

“It was great to have each other around if one of us needed anything or something came up. At one point during my senior year, I used Erin’s locker instead of my own, since it was in a better spot, so that was definitely a bonus of having siblings at school with me,” Brigid Miller said.

The Miller children were considered academically strong during their high school careers, known especially for their involvement in the social studies department. Brigid Miller won the history student of the year for the class of 2017, and is now tracing her Irish roots back to Dublin, while studying Public History at Trinity College.

“The one thing that stood out was how civic-minded they were. Of course they were all amazing students, but they had this caring and a sense of wanting to give back,” social studies teacher Karen Spahr-Thomas said.

Starting in elementary school and all throughout high school, Rowan Miller ran a March Madness bracket asking family and friends for small donations. As commissioner, he was raising money for the Comer Children’s Hospital.
Alongside their achievements, the competitive spirit between the siblings remained, however, this time in the form of standardized tests.

“[My siblings] were more of a motivation [to do well] because we have a running competition for the highest ACT score,” Maeve Miller said.

According to mother, Patricia Miller, the ACT competition is still talked about, yet there is a discrepancy with who won.

“[With a score of 31,] I say Colleen, but Rowan claims he had that as well. And Erin got a 31, we don’t know how though. She was a big mystery, no one knew how that happened.”

With a decade of history resonating within these walls, the absence of a booming Miller voice, or the classic backhanded compliments will be hard to forget.