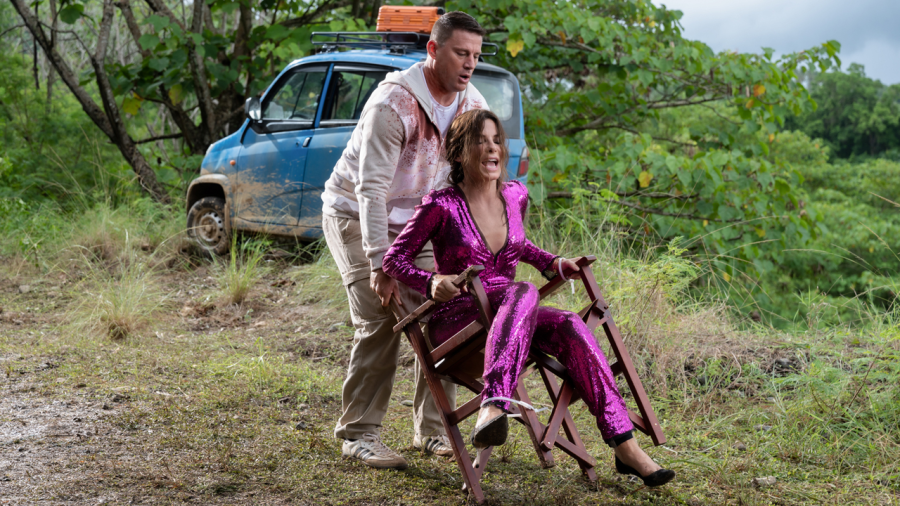 UNINSPIRED UNDERTAKING: While comical and entertaining, the love story of romance novelist Loretta Sage (Sandra Bullock) and her cover model, Alan (Channing Tatum), is not one that audiences haven’t already seen.

Humorous yet warmhearted, “The Lost City” fast-forwards audiences to summer in a tropical paradise of a film complete with a wholesome love story—yet not without obvious cliches. Unfortunately, while this movie might kindle some good laughs and scrape the surface of deeper themes, its overly familiar plot makes it at most a single-time watch.

Directed by Aaron and Adam Nee, “The Lost City” focuses on romance novelist Loretta Sage (Sandra Bullock) and her cover model, Alan (Channing Tatum). After a not-so-successful book tour, the duo soon finds themselves forced at the hands of erratic billionaire Abigail Fairfax (Daniel Radcliffe) into a remote jungle island resemblant to the setting of Sage’s recent book.

Fairfax compels Sage to translate an archaic message that supposedly leads to a rare island treasure, aware of Sage’s extraordinary knowledge of lost civilizations and ancient cultures. Despite Fairfax’s attempts, though, Sage and Tatum soon escape his clutches and set off to find the treasure on their own as a nearby volcano grows closer to exploding and destroying the island.

The plot itself might seem intriguing; however, when closer observing it, it’s nothing audiences haven’t seen before—especially when one considers the other films in which Bullock has starred. This is apparent in the initially awkward relationship between Sage and Tatum that ultimately turns into a passionate romance after they undergo a risky, unideal expedition. These characters’ relationship perfectly mirrors that of Bullock and Ryan Reynolds in “The Proposal” and even the friendship between her and Melissa McCarthy’s characters in “The Heat.“

Still, cliches are not the only shortcoming of “The Lost City.” While the movie features multiple A-list celebrities, some of them had a surprisingly short time under the spotlight—and, given these actors’ tremendous talent, this aspect of the film is a major letdown.

Probably the most significant actor who deserved more screentime in “The Lost City” is Brad Pitt, who played a CIA operative named Jack Trainer. Pitt’s character pulled off some stunning (and even hilarious) fighting moves as he helped Alan rescue Loretta. However, despite Trainer’s fearless, daring and skilled nature, one of Fairfax’s men shot and killed Trainer within only a few moments of his performance.

Oscar Nunez is another actor who should have played a more prominent role in “The Lost City.” Nunez has starred in several award-winning movies and TV shows and even acted alongside Bullock in “The Proposal.” Nevertheless, in “The Lost City,” he only appeared briefly in a humorous scene with Sage’s publisher, Beth Hatten (Da’Vine Joy Randolph). His character makes another appearance at the end of the movie, too, yet only for a brief moment.

Of course, some viewers might enjoy the tropical scenery and vibes the movie elicits. From shots of pristine waterfalls and sapphire-colored seas to venerable jungle temples and serene lost villages, “The Lost City” acts like a cornucopia of idyllic repose.

When looking at the film in its jungle-ridden entirety, “The Lost City” might pass off some summery vibes and a heartwarming love story. However, its stale execution and low screentime for multiple actors ultimately make the film more of a “seen it, done it” experience.