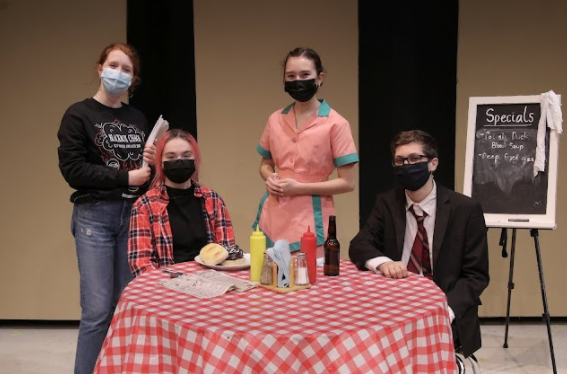 LIGHTS, CAMERA, ACTION: Actors and director smile for the camera after their production.

I came to the Winter One Acts, an annual DGN stage production, with one goal in mind: to take notes throughout the performance and report back to the rest of my journalism team. Along with a large stream of parents, friends, and community members, I entered the theater, a roomy classroom with a makeshift stage, audience, and tech platform. Journal and pen in hand, I claimed a seat in the far left corner.

On the night of Nov. 19, an overflowing audience buzzed with anticipatory excitement. The lights dimmed suddenly. As a voice narrated, “We hope you enjoy a night of chaos,” my strict Omega business was immediately forgotten. I dropped my notebook, sat back, and enjoyed it.

The One Acts program, “Blackbox Chaos,” was composed of 5 independent productions, each a short play that lasted roughly 10 minutes and featured casts with a multitude of different actors. From a woman grieving at a dreary funeral to a lighthearted office conundrum, the locations, plots, and characters in each “act” were varying and original.

The numerous scene changes kept my mind attentive as it scrambled to keep up with each nuisance and scene development. This “chaos,” however, only increased my enjoyment.

The program itself conveyed shared themes of humor, hope, and laughter, unifying each act in a unique kind of harmony. Directed and produced by students alone, “Blackbox Chaos” truly reflected the raw talent of DGN’s thespians and tech crew. The interactive element embedded into several of the acts also contributed to its unique nature; it truly felt as though I was inside the play.

Overall, “Blackbox Chaos” was nothing like I expected it to be, which made it all the more captivating. The reviews are in and are overwhelmingly positive; if you’ve never been to a DGN Drama Department production, what are you waiting for?