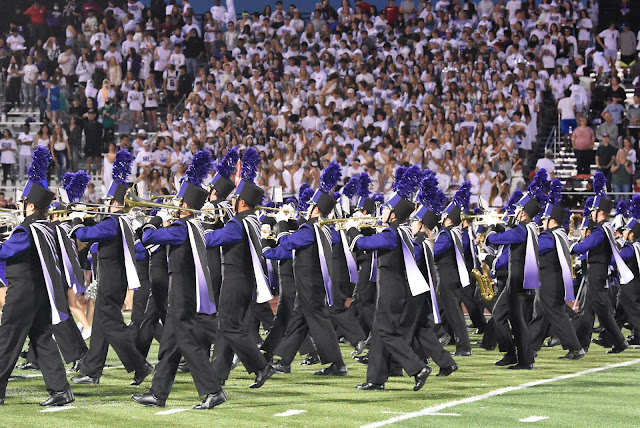 NORTHSIDE MARCHING: The marching band plays before the white-out game on Carstens Field.

This year’s return to a normal football season brought with it a full and energetic band season. Coming back after COVID-19 dismantled the 2020 season, this year looked a bit different, yet it still featured a typical student section and several wins from the football team.

The Master Facility Plan brought larger, updated bleachers to Carstens Field. For years, the student section has been located next to the band; however, with the rearrangement of the bleachers, a larger section was designated for the band on the north end of the stands. Some students were angered by the decision to move the band and its energy away from the student section.

“At first, I was disappointed to hear that we would not be next to the student section for my senior year. It felt like we were being excluded from the fun,” senior piccolo player Bansri Patel said. “There is already a social gap between the band kids and others, but I feel like this has just made the gap wider. I felt like being next to the student section made us unified on the stands.”

Another source of frustration for some students and band members was that being located so far apart on the bleachers made it difficult to hear each group. In the past, the band and the student section would interact with each other in between the band’s songs. This year, though, there was a sense of separation between the two groups.

“It’s definitely been weird because in the past, I’ve always been on the end [of the band section], so I could always talk to the students when we weren’t playing, [and] it’s different to not have them there anymore. It feels weird because we can’t even hear the student section at all, and I know that they can’t really hear us,” senior trumpet player Gwen Casten said.

That said, the band’s relocation was necessary for practical reasons. The new bleachers feature a larger gate on the north end that allows the band to more comfortably maneuver into and out of the stands as necessary without interrupting the cheerleaders, Athenas or Colorguard.

Despite this relocation, the band remained optimistic and kept their energy up. There was some adapting that had to take place, but throughout the season, the band became used to their new environment.

“At first, yes, [the energy was lower] because our cheers weren’t as loud as we remembered them to be. Typically, we would have joined the student section on their cheers and vice versa, but as the season went on, it got better,” Patel said.

This year’s Les Misérables-themed halftime show was inspired by the band’s 2018 trip to London, where they saw the musical. The arrangement, filled with music from the band and visuals from the Colorguard, took many hours to perfect. The band practiced their show every Thursday night from 5 p.m. to 8:30 p.m.

“The hardest part of being a drum major, for me, is definitely being confident in myself, my decisions and abilities,” Blanchard said. “Something that helps with my confidence a lot is really the other members of the band and the other leaders within the band. They always know when to hype me up and I feel so loved and supported by them.”

Not having a regular season last year, the band experienced some challenges bringing everyone up to speed. Essentially, this year’s band had two groups of first-year high school band students, the sophomores and freshmen.

“I’m really proud of the band. A lot of the members are coming in not getting the full amount of music education that a lot of the rest of us have. It took a little while to fully find our sound and to get back into it, but these kids have really worked hard to put a really good show on the field. And we’re really excited about the way it turned out,” Peckenpaugh said.

Although Friday Night Lights only recently finished, the band staff has begun conjuring up themes for next year’s football season.

“The staff never stops thinking of ideas, and I never stopped thinking of ideas either,” Smith said. “We have some ideas, but nothing is decided. We always announce our shows for the next year on March 4 [“March forth”], which is like an unofficial, international marching band day.”

Although the drumline could not host its typical, post-game underground track ritual due to COVID-19, they still came back this season with a bang. The drumline hyped up the crowd before the games and during the half-time show.

The drumline hosted extra practices Tuesday nights along with the whole-band rehearsals on Thursday nights. Off the field, the members of the drumline spent a lot of time together, often going to Portillo’s or Taco Grill after games and practices.

“Since we are with each other so much, we have all become really close. It’s fun to be supported by all types of people from all different grade levels,” senior tenor drummer Mackie Hopkins said. “The drumline is just a really fun environment to be a part of.”

Senior and center snare Kyra McComb is in charge of “tapping off” everyone in the drumline. McComb sets the rhythm for the rest of the members during pregame and halftime and often communicates tempos with the drum majors.

“It’s been challenging for me because I’m not used to leading and knowing what to say at all times. Often, I’ll have to rely on other people to help me out in terms of that, but I also really enjoy tapping people off and kind of getting the party started,” McComb said.

The drumline is famous for its solos and its “stick flips” performed by some of the drummers. One, performed by junior tenor drummer Tim Wise during the construction and neon theme game against York, caught the student section’s attention. The height and execution of the toss are remembered by many students.

“I was expecting a good reaction because no one ever really did that before, but it [the reaction from the student section] was way more than I thought it would be,” Wise said. “I did plan on doing that for a while. It was probably a week before that game that I started practicing the stick flip.”

Wise plans on auditioning for drumline captain next year. Many members of the band remember their Oct. 14 practice as one of their fondest memories from the season. Smith suggested the band do 60 jumping jacks to start the practice to replicate heavier breathing during a real game. That night, many band members said they “found their sound.”

“[The jumping jacks] just helped us thrive. For some reason that ignited something, and we managed to really pull off some amazing sound that we hadn’t achieved before,” McComb said. “We were already sounding great [before that practice], but that night was so special for everyone.”

The Season as a Whole

The marching band program has given many opportunities to the students who dedicate so much of their time to their role in the band.

“[As a drum major], I get an opportunity to give back to a program that has given so much to me. I’ve been in the band my entire four years in high school, and it’s really been a life-changing experience to meet the people that I’ve met and to grow the relationships that I have,” Peckenpaugh said.

“[My favorite part] is giving the students an opportunity to make something that they’re proud of. It’s really cool to give students the opportunity to come together, work together and really have to rely on each other. I think that’s a really special experience,” Smith said.