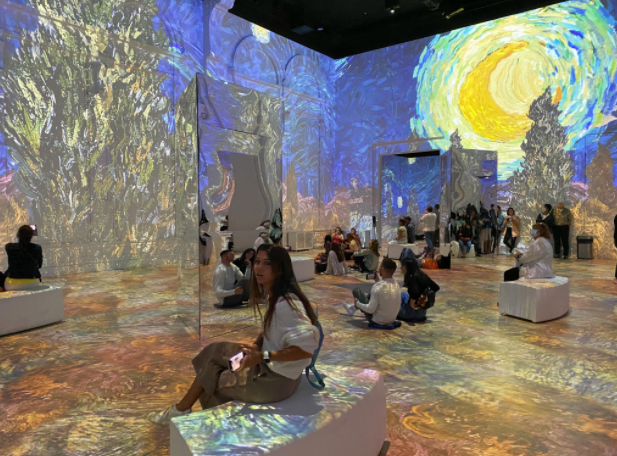 You’ve seen the Instagram stories, posts, maybe you even saw mine. The Immersive Van Gogh Exhibit in Chicago surely calls for many pictures due to the rarity and beauty of the scene. By attending the exhibit, you are guaranteed to look cooler than all your followers, but are you guaranteed to get your money’s worth?

For a suburbanite, taking the train to Union Station makes for the perfect summer day. My friend and I couldn’t complain about the hour-long walk through downtown to end up in the picturesque neighborhood of ivy-laced grey stones, Lincoln Park.

The venue was just as charming, in a brick building on the corner of Clark Street. As we headed up the gold railing and entered the building, the exhibit staff scanned our tickets and expected us to figure out the rest. Inside we were surrounded by white walls, mirror structures, and varied sized white blocks for sitting. There were three of these identical, open rooms that project the same show. Audience members were free to bounce around wherever they’d like. The uncomfortable seating was distracted by the moody projections of stars and sunflowers all over the walls, mirrors, and myself.

Everyone knows Van Gogh as the man who cut off his own ear in a fit of rage. That abundance of emotion is something that was very apparent through his work, even to someone who has never studied Van Gogh. Each painting glaringly captures sorrow among the shades of blue and euphoria among the yellows. Although the exhibit doesn’t entail Van Gogh’s physical paintings, I was, nevertheless, immersed. To see the profound visions of Starry Night begin to swim around me was enchanting.

Immersive Van Gogh is not your typical exhibit, and that’s what makes it important. It covers the demographic of both fancy old men with accents and dainty glasses as well as cool teenagers with canvas totes. As someone who never felt his art was appreciated in his time, this exhibit gives Van Gogh the justice he deserves.

While paying $55 for an hour of projections doesn’t look great on paper, the experience was priceless. My favorite part was seeing the young families and urban teenage couples enjoy something so ravishing. In a way, the family with a newborn baby and stroller sitting against the wall was the aspect of the exhibit that brought tears to my eyes. I’m not sure it was intentional but amongst COVID times, watching a beautiful show in a room with dozens of other people felt like the most intimate and fulfilling thing I had done in too long of time.

To decide if the exhibit is worth it depends on how one absorbs the show around them. That sunny day with my best friend is one of my fondest memories, so to me, it’s a no-brainer. I advise you to find the worth in it for yourself. Get tickets with your favorite person, and make a day out of it. Just don’t try to justify a $15 purchase for an enamel pin. That is not worth it.