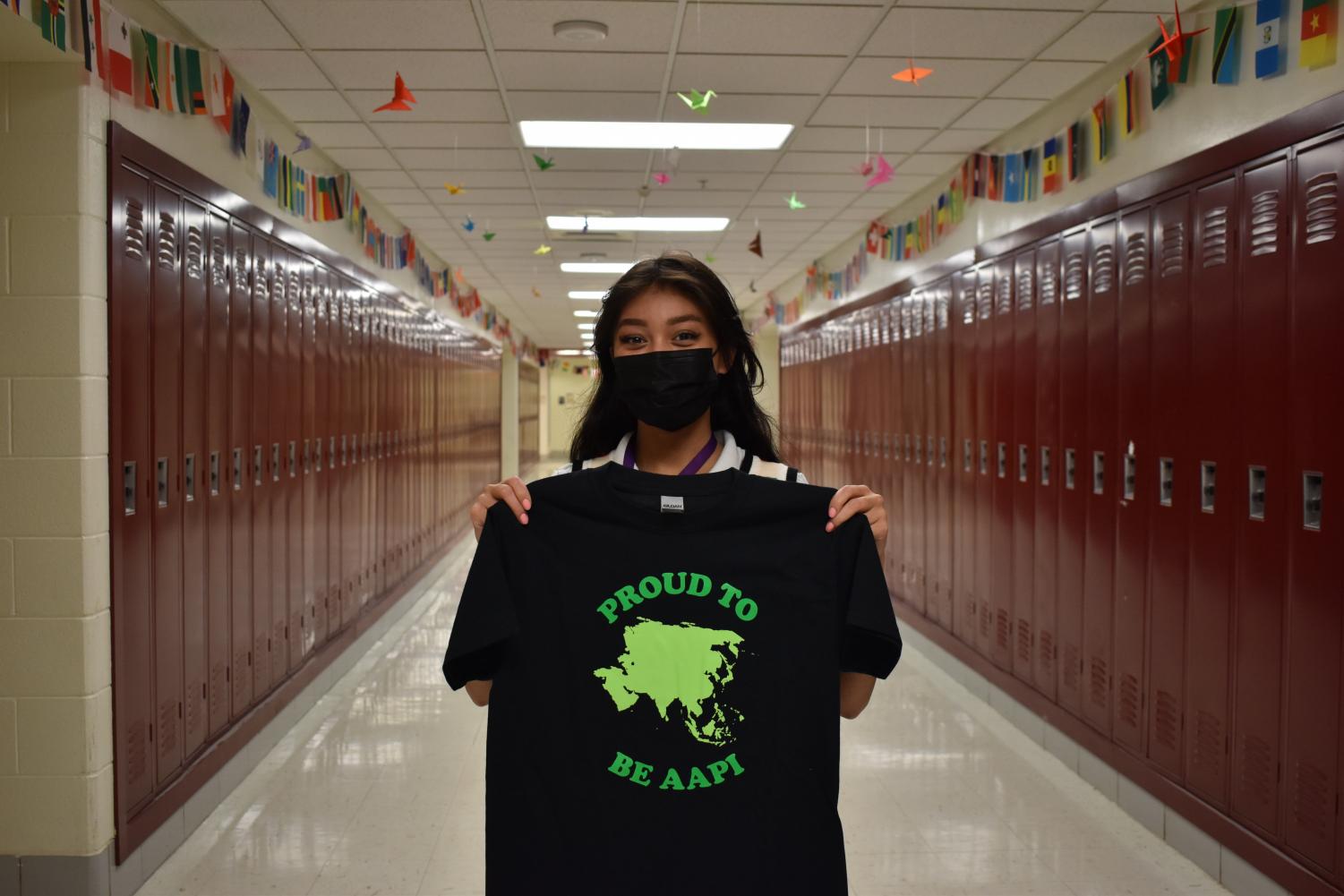 PROUD TO BE AAPI: Megan Wikowsky (12) is a part of the planning committee for Asian American Pacific Islander month in May and made t-shirts for students and staff to wear to support. She stands behind origami made by Audrey Lee (10) hung in the ceiling tiles. (Gretchen Lucina)

PROUD TO BE AAPI: Megan Wikowsky (12) is a part of the planning committee for Asian American Pacific Islander month in May and made t-shirts for students and staff to wear to support. She stands behind origami made by Audrey Lee (10) hung in the ceiling tiles.

“My grandparents go to Chinatown a lot to go get food, and I heard that Chinatowns are a very prominent place where all the targeting happens,” junior Mia Chen said. “They have stopped going to the Chinatowns and they have had to make these adjustments just to stay alive; it’s really sad that our whole family’s now living in fear at this point. I’m genuinely scared.”

Chen was one of the students who went to DGN’s Asian American/Pacific Islander (AAPI) processing hours March 23 — one week after an array of attacks against Asian Americans including the Atlanta attack that killed eight people. English teacher Samiyah Nageeb took the initiative to oversee and plan the processing hours by creating sign-up sheets and offering a processing space for students and staff.

“I offered one processing space exclusively for staff and two spaces for staff and students, offering an optional AAPI affinity space as part of the processing space,” Nageeb said. “The folks that were AAPI-identifying shared sentiments of feeling seen, heard, and valued—some reported that this was the first time they felt this way in school.”

“The folks that were AAPI-identifying shared sentiments of feeling seen, heard, and valued—some reported that this was the first time they felt this way in school.”

There have been more than 3,800 hate crimes in the last year against Asian Americans. Even before the March 16 attacks in Atlanta, DGS counselor Kanagavel Vetri saw more people bringing awareness to the hate crimes on social media. He worries that people bring the issues to the surface but don’t take action afterward.

“But then invalidation followed, so there’s always this constant pushback that occurs. You bring it to the surface, but then people don’t wanna acknowledge that this is truly a problem and this follows a pattern in other areas like Black Lives Matter and other issues that [have] really risen to the surface this past year,” Vetri said.

Speaking Out and Taking Action

Senior Megan Wikowsky was personally affected by the hate and explains how it hit home for her.

“I live with my grandmother and she’s 100% Filipino. My mother, she works at Good Sam, and my grandmother, because of the recent attacks in Atlanta, has been worrying about the safety of my mother whenever she’s been going to and from work. It’s disheartening to see that she has to worry about whether or not her daughter’s going to come home safe,” Wikowsky said.

A few days after the processing meeting, Nageeb and others created the Asain American Pacific Islander Student Union (AAPISU). The union already has 40 students joined. Chen, who leads the new student union, is honored to be a part of the experience and talks about her hopes for the future.

“I hope to provide a safe and empowering space for AAPI at DGN to get in touch with our culture because it often gets brushed aside. Not only do I want us to feel like we have a community within the school but I also want us to be able to connect with the school as a whole. I’m also excited to get to know more [about] AAPI at DGN,” Chen said.

History teacher Sara Temple attended the meeting as well. She is now a part of the AAPI planning committee for the Asian-American Heritage month in May. When reflecting upon the attacks in March, she said there is a lack of focus on discrimination against other races.

“The first thing that comes up when it comes to racism in the United States is slavery, and that’s certainly an important topic that we should discuss, but I would guess that most of my students don’t realize the history that is behind that’s racism towards the Asian American community,” Temple said. “I think it’s something, as a history teacher, that I want to touch on and make sure that students are aware of and so that we represent that community too.”

Along with Temple, DGS English teacher Kierstin Thompson is taking action to help educate and to end the silence around Asian discrimination.

“As a white person, one of the things I’m really trying to confront in my own racial conscious work is understanding why white people don’t talk about…  racism against the Asian American Pacific Islander [community],” Thompson said. “Silence is something that I’ve noticed too and something that I need to commit to changing, to talking more about, and to bringing more attention to the racism against the Asian American community.”

Beyond the horror of hearing about a mass murder on the news, junior Quentin Mills heard something else that deeply bothered him.

“Something that disturbed me about the recent events was during a press conference when a leading policeman decided to say that the man responsible for the shooting spree in Atlanta was ‘having a bad day.’ It’s upsetting and dangerous to not hold attackers accountable and make excuses for behavior that causes this kind of harm,” Mills said.

Junior Melissa Parkinson sees a similar problem related to the attention and the angle taken when events involving Asian-Americans are highlighted. She took AP US history and remembers learning about the Chinese Exclusion Acts, but believes that there should be more Asian history present in the class.

“I think that we have covered the hard acts, but I think that there are definitely a lot of places within units where we could focus the conversation a little bit more on [AAPI] discrimination,” Parkinson said. “I think that [AAPI history is] present in the curriculum, but it isn’t as [prevalent] as it could be.”

Along with AAPISU, Nageeb is also a member of the Equity and Inclusion Council and a Seeking Educational Equity and Diversity (SEED) leader. The AAPISU is to be led by Chen as well as sophomore Amneet Kaur, who have many prospective plans for DGN and have created an Instagram page for the union (@ dgn.appisu).

“AAPISU is in the process of collaborating with other student unions within our school to increase awareness,” Nageeb said. “The Black Student Union’s leader, Quentin Mills, is already planning with the AAPISU leads for May and doing things like re-sharing their Instagram stories to show support. Megan Wikowsky created AAPI tee shirts for the upcoming heritage month.”

Nageeb is eager to celebrate the month of May this year especially.