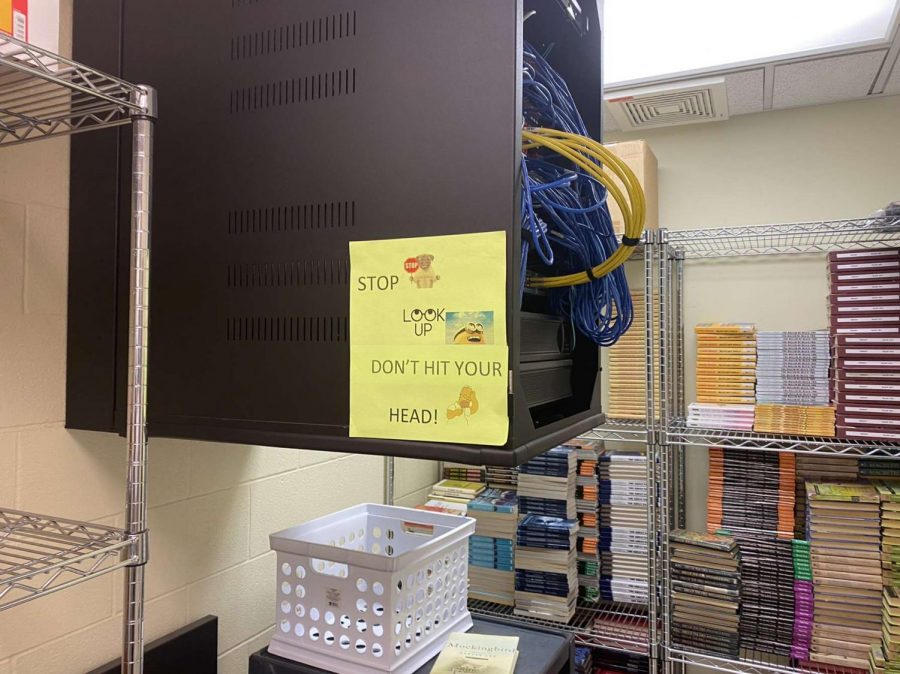 STOP AND LOOK UP: the IDF cabinet in the English office closet, which now has rubber lining and a sign on it.

The English office is just about the last place at DGN you’d associate with the word “dangerous,” but before the actions of Michelle Briones, that’s exactly what it was.

The junior, who works as a student aide in the English department office, noticed the sharp edges around an IDF cabinet, which holds networking equipment to allow for internet connectivity in that part of the building, jutting out of the wall in the office’s closet.

“I work in the English department as an aide. When I was putting books away in the supply closet, I noticed the sharp edges in the [box] I talked to Ms. Georgiou, my supervisor, about my safety concerns. I then talked to her about my solution,” Briones said.

After conversing with Georgiou, the English office secretary, Briones met with tech administrator Matt Mensik and Supervisor of Building and Grounds Michelle Cannan to finalize a solution. Briones explained how she had some ideas at first, and then the two she talked with helped her brainstorm additional ideas and come up with a plan.

“Mr. Mensik, an administrator in the tech department, and Ms. Cannon, director of CMG, met me in the English office to discuss different options. They suggested using rubber tubing along the sharp edges,” Briones said.

The box is now lined with the tubing, preventing the danger of hitting one’s head on the previously sharp edges. Mensik applauded Briones’ actions and described how the English office is now a safer place to work.

“Her idea was really good, simple, and easy, and she came and talked to me about it. I wouldn’t have thought about it, I know Ms. Georgiou doesn’t like that that box is there but it’s not going anywhere,” Mensik said with a laugh. “But this is a solution that makes it safer.”