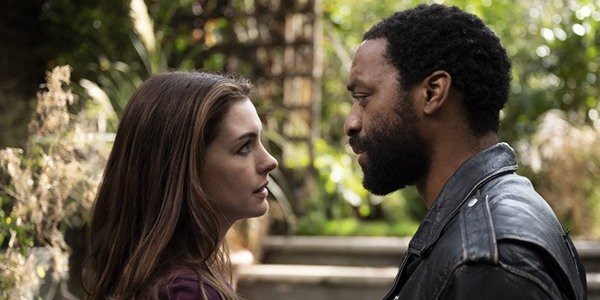 Set during the early weeks of the pandemic, Locked Down is a timely, relatable chronicle of the average quarantine household. Like some memoir of a difficult time ameliorated instead into a witty screenplay, the film satirizes the initial misery, boredom and adjustments people experienced as they, too, “locked down” at the start of the virus’s reign. However, while the movie was entertaining in a funny and approachable manner, in the end, I was not impressed.

After getting arrested a decade earlier, Riggs could only work as a delivery truck driver, consequently feeling regretful and discontent with his life. On the other hand, Thurman assumed the role of the Miracore UK CEO, although she expressed miserable disappointment with her successful occupation. The urban couple, stuck together yet dealing with their own vocational controversies, faced a crumbling romance in addition to the many other novel challenges and adaptations of the pandemic.

Nevertheless, the duo comes together when Thurman’s job assigns her to clear out inventory at Harrods department store. Riggs’s boss, Malcolm (Ben Kingsley), tasks him to truck cargo from the same store–one item being a $3 million Harris diamond. The pair, realizing their duties overlap, devises a criminal heist to steal the diamond together and tosses their romance issues aside.

While the synopsis may seem intriguing and action-packed, one will find that the film itself was not. Thurman and Riggs spent much more time discussing their emotions, thoughts and plans instead of actually expressing and performing them. There were at least five instances where the couple partook in a lengthy chat or fight that led nowhere. Perhaps their prolonged conversation represented quarantine’s mundanity; however, I ultimately found this detail to hinder the storyline rather than advance it.

Most likely due to its uneventful plot, Locked Down seemed ridiculously slow-moving. The film focused too much on its already weak buildup to its eventual climax (if I should even call it that) and often seemed repetitive, with no apparent advancement to the main story taking place. Even the heist Thurman and Riggs ultimately executed felt absurdly short-lived, incorporating minimal close calls and heart-racing activity one would typically expect to observe in the stealing of a multi-million dollar gemstone.

Another disappointment I encountered with the movie was the lack of particular actors’ appearances. One initial factor that drove me to watch Locked Down was its inclusion of multiple distinguished actors like Ben Stiller and Mindy Kaling (in addition to Hathaway and Ejiofor, of course). However, the film’s surprising lack of emphasis on their roles displeased me, with both only performing in a mere couple of scenes.

Despite these shortcomings, however, I did enjoy a few good laughs, specifically its approachable depiction of the first weeks of quarantine. With Thurman struggling to adjust to her awkward Zoom meetings with her colleagues and Riggs consistently refusing to get out of bed for yet another day of confusion, challenges and irritation, the film brought me back to my initial experience with the pandemic.

In the end, though, while I did admire the movie’s undeniable relatability, I felt that its substandard plot ultimately overshadowed its timely laughable qualities. As is usually the case with the film industry, the screen works maintaining short-paced storylines and mundane narratives evoke little admiration and delight from their audiences. And, Locked Down was certainly no exception.