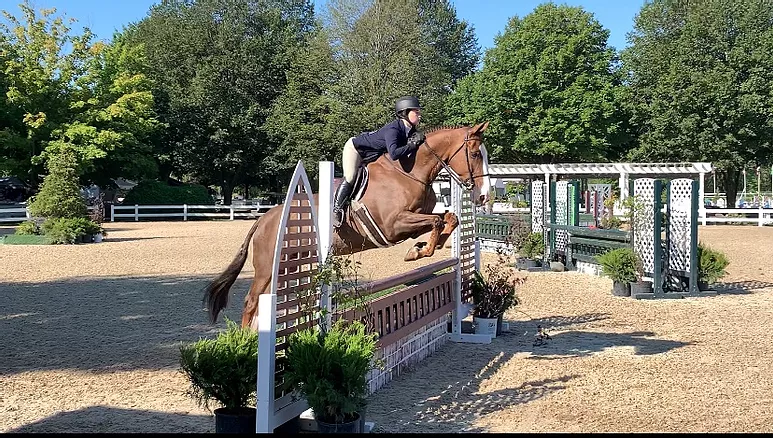 Athlete of the month for December, Senior Emmy Dolin competes in a unique sport that DGN students typically aren’t too familiar with, which is being an equestrian rider. In November, she committed to Delaware State’s nationally ranked D1 school for her sport, where she is excited to continue her career.

Her career started 10 years ago, at an overnight camp.

“I went to an overnight camp in Wisconsin that my dad used to go to when he was younger, and they had horseback riding there as an activity. My dad suggested I try it out because he used to do it when he went to this camp too,” Dolin said.

From there, she signed up for lessons and now she trains at Perfecta Farm located in Elgin.

“At Perfecta Farm, I ride many different horses, all with different levels of experience. Riding different horses is a great way to gain more experience and understanding as a rider because you learn to adapt to each horse,” Dolin said.

Close friend and teammate Emma Lackey has competed with Dolin for years now and is excited to see what she has in stock for the future.

“She has come a very long way in such a short amount of time and I know she has wanted to be a D1 athlete for a long time. She worked hard, doing whatever she could to get where she is now. I am so happy and proud of her” Lackey said.

Her coach, Kimberly Gardiner, explains how much Dolin has improved throughout her years at Perfecta Farm.

“Emmy has improved greatly since she started with us. She started in the 3” division and has moved up to the Big Eq 3’6” division with very competitive results. For the last two years she has qualified for the National finals,” Gardiner said.

Dolin rides a hunter jumper, which is a type of style of riding and she competes on the most competitive circuit — the A circuit.

She owns her own horse but he is currently leased out to a different barn so she doesn’t ride him. She does catch riding, where you ride many different horses because of her circumstances. She explains that this type of riding is something she will do in college.

“The college provides horses you practice on whenever it is that you have practice. For meets, we go against another D1 ranked college riding team and we essentially pick out of a hat which horse we ride in the meet,” Dolin said. “The rider from your own team rides the given horse and then the rider from the opposing team rides it after. Whoever gets the higher score, wins the point.”

To her coach, not riding her own horse sets an example for other riders.

“Emmy enhances our program by showing people even if you don’t have your own horse if you put in the hard work you can still be very competitive. And on top of that she is a great cheerleader for all of her teammates. I love having her as part of our family” Gardiner said.

Dolin explains that being an equestrian isn’t simple and takes hard work.

“I know we make it look easy but trust me, it’s not, and it takes years of practice,” Dolin said. “When I came back home from camp, my parents signed me up for lessons and throughout learning the foundation of riding, moving barns a couple times, and owning many horses, I am a nationally ranked equestrian athlete.”