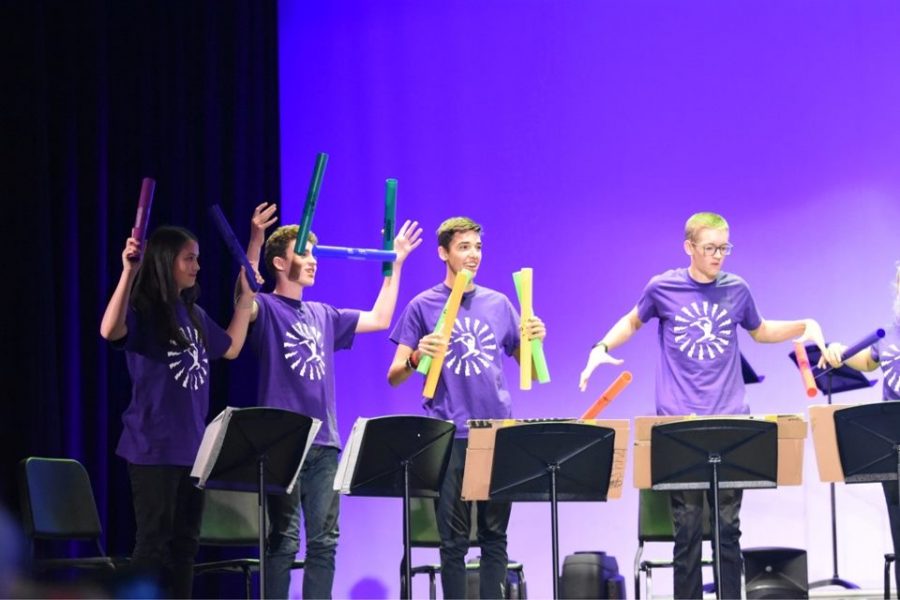 “I just think it’s kind of funny, like the stereotypical [teenager] is out driving fast cars, doing drugs, just being a delinquent, and we’re here whacking sticks against our legs,” senior Drew Swenson said. Swenson, along with nine other DGN seniors, have been ‘whacking sticks against their legs’ since the beginning of the junior year. The ten of them have created a musical group and named themselves Trojan Thunder.

Swenson is only one member of the ten total musicians that make up the current Trojan Thunder- seniors Tessa Arenz, Justin Berghorst, Carissa Blumka, Liam Kearney, Quinn MacKenzie, Owen Nystrom, Caroline Pleune, Tressa Rapach, and Rachel Rios are all members of the group.

These ‘sticks’ Swenson referred to are instruments known as Boomwhackers: hollow, plastic tubes that each produce a note, depending on its size.

“[Boomwhackers are] all different notes, and so that’s why it takes so many people just to play such a simple part. Each two or three-inch difference in the pipe creates a different note, so then each person can only play like two notes at a time,” MacKenzie said.

Only being able to play one or two notes may sound difficult, but to Kearney, the concept is familiar.

“It pretty much works the same as a base drumline does, in that every part is different and it’s just kind of split parts, and together you just make your rhythm or song.”

“The only downside to Boomwhackers is when you whack yourself, you get these massive bruises on your thighs… it’s worth it in the end because no pain, no gain,” said Rios.

Along with the battle scars, Trojan Thunder faces other obstacles that might not be common when playing a more traditional instrument.

“There’s some unique challenges that come with playing Boomwhackers, which is that if you’re on an instrument, you have all of the melody… but when you’re playing one or two notes of the melody… then you have to wait for your exact moment to play [your notes],” Nystrom said.

Additionally, with a group so large, it can sometimes make arranging music difficult: Boomwhackers only have 2-3 octaves, limiting the span of notes to work with. Key changes may also pose a problem. In that situation, people may have to sit to the side if their note becomes excluded in the key change.

Despite these complications, many members of Trojan Thunder believe their individual music backgrounds give them a helpful upper hand in working with Boomwhackers, and that it also makes the activity much more enjoyable. All ten members already play an instrument (or multiple) in band or orchestra.

“Without our music background, getting [the parts] to line up at all would’ve been chaos,” Blumka said.

Blumka plays in the band along with everyone except for Berghorst, whose musical talent lies in the orchestra.

“We’ve already done the hard work in band and orchestra, and now we can kind of just have fun with it,” Berghorst said.

This year, Trojan Thunder made their second appearance in DGN’s talent show. Their rehearsal process leading up to the big day can be described as spontaneous and laid-back, but Arenz especially admires that about their group.

“We were a lot more efficient [in this year’s talent show] because we were all calm and just trying to have a good time. We just want to all get together, make some music, and just have fun with it.” Arenz said.

While Trojan Thunder typically arranges their music, this year’s talent show performance featured an arrangement by Boomwhacker group HarvardTHUD. Because of the online environment, the talent show was included in the Virtual Homecoming assembly. Rapach appreciates the group staying together through the pandemic, and being able to meet under safe circumstances.

“With COVID, [Trojan Thunder] was kind of this little escape from everything going on because… we’re such good friends and the chemistry is so easy between us,” Rapach said. “It was really nice to just get away and play music because we’ve been deprived of those opportunities for so long to play together.”

When playing together, Trojan Thunder does not look to one person as a leader; rehearsals are all self-led and collaborative, as they give each other suggestions and work together.

The group plans to put their minds together again, this time for the holiday season.

“We have possible plans to go Boomwhacker caroling, so that may not have been the end of our Boomwhacker journey,” Pleune said. “It would be super easy with COVID, just like we all wear masks and space out, and we just carry our little plastic sticks. It would be great.”

Though the future may be uncertain with the pandemic at hand and seniors leaving for college, Trojan Thunder feels hopeful they will play together again and continue to create music. No matter what happens, Blumka is proud of what they’ve accomplished and the memories they’ve made.

“I think we really did create something impressive, that we can be proud of looking back watching the videos of our performances,” Blumka said.